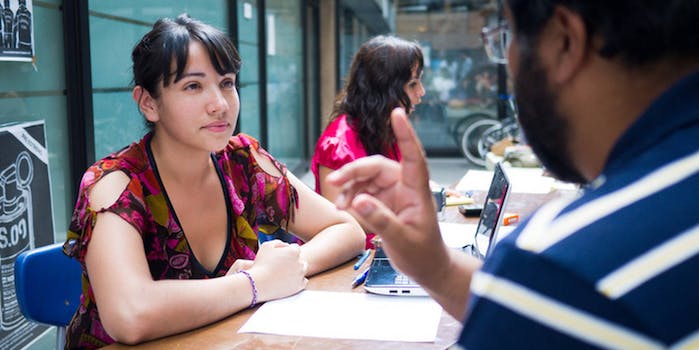 Hint: It's not your shoes or the sound of your voice.

Today marks Equal Pay Day, which naturally instigates discussions of pay discrepancies between genders (like women earning 79 cents for every dollar earned by men). And while it’s easy to find tips online, both good and bad, for how to “lean in” and exude confidence when asking for a raise, not all advice is created, well, equal.

For example, Vogue.com stirred up an online conversation yesterday when it published a post called “6 Secrets to Negotiating a Raise Like a Boss.” Though it contained some sound guidance, like choosing your words wisely and coming at the negotiation from a position of power, other tips were deemed decidedly sexist. The writer advised raise-seekers to speak in a more pleasant pitch; to avoid coffee or cold beverages, which strain the vocal cords; to wear flats instead of heels; and to “stay true to your feminine side.”

In other words: Embrace the pretty parts of your womanhood, and avoid the more brash or masculine.

Step 7: Light your boss' desk on fire. Dance on its ashes. Nothing matters. https://t.co/zZ3zUQ0aTN pic.twitter.com/RAt1jGAnJ0

A woman could very likely be passed up for a raise because of her vocal fry or upspeak. But, according to several career coaches who spoke to the Daily Dot, women should not assume it’s the superficial things that define them professionally. Instead, they should believe that it’s their work that makes them shine.

Kim Bartels, Ph.D, and a career coach for women, says that it’s often ingrained in women not to ask for the money they believe they deserve. “We’re not really socialized to speak up for ourselves, or we’re not always taught how to,” she told the Daily Dot via phone from her Minnesota office. “Or we don’t always have good role models for that.”

She says that women are not always comfortable placing monetary value on their worth, which creates problems when it comes time to step into their boss’s office and ask for a raise.

So Bartels’ main piece of advice to women? “Take gender out of it.”

She elaborates, “It doesn’t matter who your boss is, if it’s a man or a woman. It matters that you can collect data, collect your thoughts in advance, and articulate the value you provide in your position… It’s about talking about yourself—independent of gender—and what you bring to your organization.”

“Women can be particularly sensitive to talking about themselves and their best qualities.”

This idea of having the cold, hard facts to back up a raise pitch is echoed by Tara Sinclair, chief economist at job site Indeed.

“It’s easier to ask for a raise when you focus on your good work and your accomplishments,” Sinclair told the Daily Dot via email. “Women can be particularly sensitive to talking about themselves and their best qualities, so it can be good to step back and say, ‘Not only am I worth it, but the work I’ve done is worth it.’ Focusing on your accomplishments, for both parties, takes you and your gender out of the equation.”

Maggie Mistal, a New York-based career consultant and coach, says for her most successful raise negotiation, she went completely against the traditional norms of femininity.

“I got my largest raise in corporate after breaking a pen during a raise conversation with my boss,” Mistal told the Daily Dot via email. “I had met every single goal set for me that year and was told I wasn’t going to be promoted. My response, ‘Well, I hope I’ll be compensated for all my hard work.’”

Then she snapped the pen in her hand. “It wasn’t a planned move, but it worked,” she says.

On the other hand, Pat Katepoo, founder of Work Options and Pay Raise Prep School for Women, says there may be something to this idea of leaning on your femininity. “Being nice trumps being assertive,” Katepoo told the Daily Dot via email from Hawaii, where she’s based. “Negotiation/gender research shows that it works. When women go against expected social norms, it results in social sanctions and resistance. That means, less likely to get the raise.”

On her blog, she offers the following tips for a woman in a meeting discussing her potential raise:

Another tip: Assess the market climate when asking for a raise, Sinclair says. If times are good, she says, you should be getting your share.

“Don’t think you need to necessarily come in with a litany of reasons for a raise,” she says. “In this improving economy, now is a time when everyone should be asking for a raise if they have been doing the work that has been assigned.”

And after you’ve done all the research, the preparation, and the presentation, that’s when it’s time to be quiet, Mistal adds.

“Stop talking once you’ve made your case for a raise,” she told the Daily Dot. “If you state your case and then keep talking, your main point can get lost, or it can make you look less confident. Don’t drone on and on. Rather, state what you want and why and then stop. Let your boss take it and react. Don’t fill the silence. Be patient. Then listen.”

The pitch of your speaking voice is up to you.