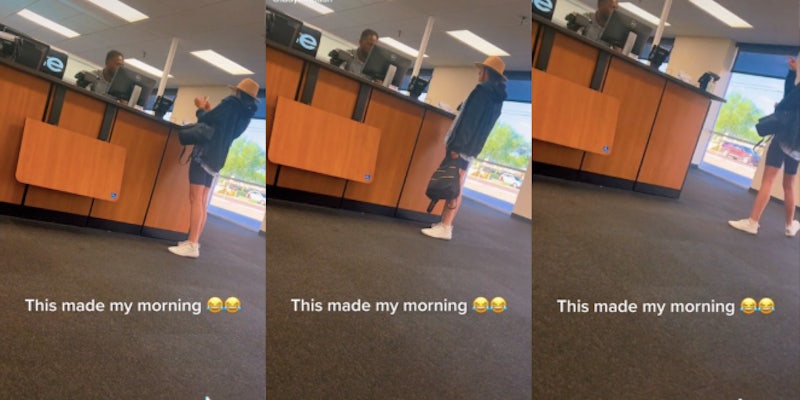 ‘God bless that man for that calmness’: Enterprise Rent-A-Car worker keeps cool while ‘Karen’ berates him

'Have a good day ma'am gets em every time.'

A viral video captured the moment a woman made herself a spectacle at an Enterprise Rent-A-Car location. The worker she directed her ire at is being applauded by viewers for his reaction.

The first video drew in more than 1.1 million views, with a second video garnering more than 16,000 views on TikTok.

In the first video posted by esthetician @ladybugtash, the woman mocks an Enterprise attendant. It is unclear what lead to the escalation of the situation that resulted in the woman cursing at the employee. @ladybugtash referred to the woman as a “Karen” in the caption.

“(You’ll) get your ass written up, you asshole,” the woman says in the video, mocking the Enterprise attendant. “Please tell me what to do some more. I’m calling every single one of these—I don’t even give a shit. I don’t know who the fuck you are, the fuck you think you are. Fuck you.”

The second video captures the woman’s reaction to being asked to leave, indicating that it was filmed prior to the woman’s outburst. It shows her asking for additional information regarding where she can go next for a rental as she was being “kicked out.”

Viewers praised the Enterprise employee, who appeared to handle the situation calmly.

“Way to go, Bro,” one commenter wrote. “Don’t let someone pass their negative energy on to you. Let them keep all of it.”

“A person who can control his emotions like this man did, is a next level human!” another said. “I applaud you sir! Don’t waste your energy!”

The Daily Dot has reached out to @ladybugtash and Enterprise via email regarding the video.