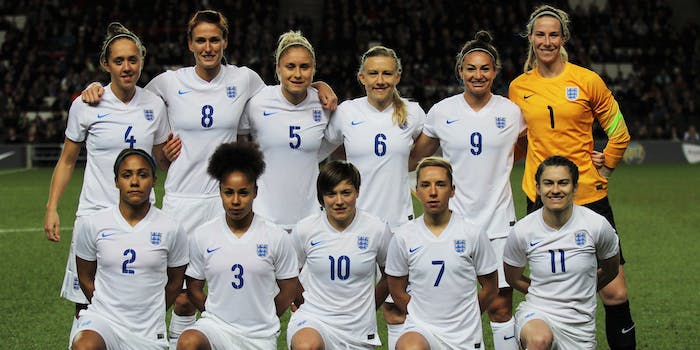 Women can be professionals or family members, but they can't be both at once.

The England women’s national soccer team won the bronze in the Women’s World Cup Saturday, beating Germany 1-0 after a devastating loss to Japan in the semifinals, but the team’s stars were almost immediately reduced to archaic gendered roles upon their return to the U.K. 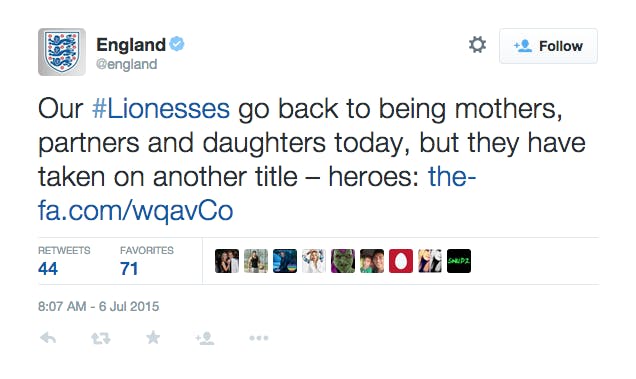 The accompanying article on the Football Association website initially led with the same line—adding the word “sisters”—but that line was also deleted without any notice.

The new lede highlights the bronze medals the players wore around their necks upon landing at London’s Heathrow Airport. There is no mention of gender roles. 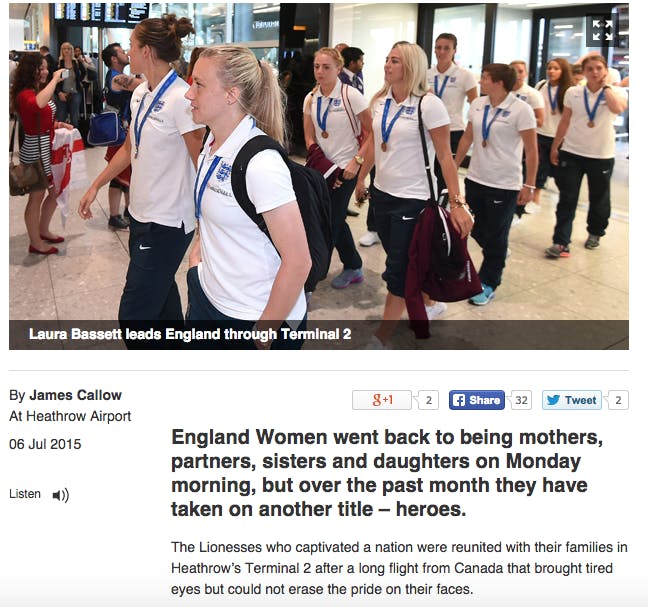 The rest of the article featured quotes from England’s players, who looked forward to the future and what they hope to be able to accomplish on the international field.

The tweet and press release wouldn’t have traveled far beyond England’s fanbase had they not included the line that many people are calling sexist. The tweet was up for less than an hour, but that was long enough for people to slam it for seeming to suggest that the players could be mothers, sisters, and daughters or soccer players, but not both at once.

SUPER AWESOME WOMEN MUST NOW RETURN TO THE KITCHEN BECAUSE WOMEN. pic.twitter.com/TXNq5Kooj2

Apparently, unlike male footballers, women are Transformers who can only be footballers for a limited time. https://t.co/ladlaMZnaS

@england well they are hardly returning to the pay and benefits that male players seem to enjoy.

I don’t need femimsms YES IT IS TRUE FEMALE ATHLETES TRANSFORM BACK INTO WIVES AND WOMBS IMMEDIATELY AFTER SPORTS END pic.twitter.com/ui8uMrrpia

This is yet another instance of women’s soccer not being taken seriously by the organizations that run it, but at least the FA didn’t talk about the women’s looks, like FIFA.com did with U.S. forward Alex Morgan last week.

This year was the best Women’s World Cup show for England, which ranked sixth in the world prior to the tournament, since the games began in 1991. When the next Women’s World Cup comes around, the English players may prove to be a formidable force—if their own country can take them seriously.

The England men’s national soccer team—presumably a team always full of fathers, partners, brothers, and sons—hasn’t won a World Cup since 1966, hasn’t ranked higher than fourth place in the half-century since, and did not make it past the group stage in its last World Cup appearance in 2014.

Update 12:43pm CT, July 7: The head of the English soccer league has issued a statement defending the tweet and arguing that it was misconstrued because of the popular conception of the league as out of touch.

“When you think [of the Football Association], you think of an old man, reactionary, [wearing a] blue blazer. … The FA has been a reactionary organization … so you’re conditioned to cut no slack,” FA CEO Martin Glenn said at an annual luncheon. He added that if the tweet had come from an American tech company like Google, Twitter users would have understood that the message was complimentary, not demeaning.

Photo via joshjdss/Flickr (CC BY 2.0)