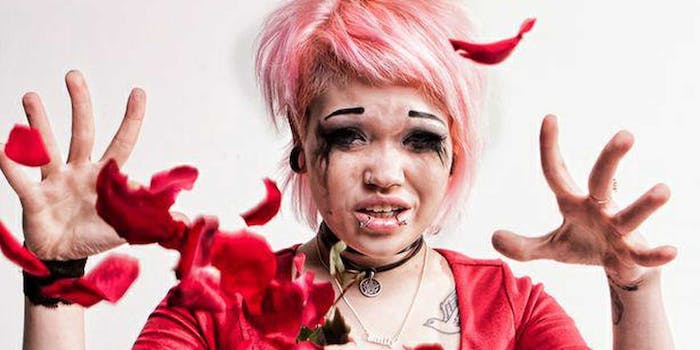 Fetish model confronts her harasser—now he wants to press charges

Emily Snow is a fetish model and podcaster who goes by the provocative but harmless-sounding name Fetish Doll Emily. But make no mistake: Snow is not afraid to throw down. After a man was harassing her online, she decided to confront him and record the whole thing.

Snow, of Houston, has her own website and a podcast called Nocturnal Addictions in which she answers listener questions about their deepest, darkest desires. The goal, she writes, is to “to encourage others to be open about what turns them on,” and as a phone sex operator for six years now, she’s heard it all.

In a recent Facebook post, Snow announced that she’d be trimming down her friends list to make it more manageable. That’s when a man, who goes by Agnello Dei on Facebook, stepped in to call her a “slut” and say she’s “nothing more than a fleshlight.” Screenshots provided to the Daily Dot by Snow confirm the conversation.

“I receive these messages daily. Sometimes once an hour or more,” Snow told the Daily Dot. But this particular interaction really got to her. She said in addition to his comments, he sent nude photos from her website to her family and shared photos of her home from Google Maps. That’s why she invited the man to meet her at a local Starbucks to talk it out.

The two reportedly met last Tuesday afternoon, and in her video, we see Snow enter the coffee shop, sit down, and talk with Dei. At first they have a reasonable conversation about what motivated his aggressive comments. The conversation turns heated when Snow compares her “slut” photo with one of Dei’s in which he sports glitter eyeshadow and pink hair and she calls him a “faggot.” Ultimately, Snow throws Dei’s drink in his face and the two leave the restaurant screaming at each other.

From there, the footage is wobbly as Snow flees to her car and Dei repeatedly calls her a whore. According to Snow’s account, he is kicking her as she seeks safety.

But Dei’s account is strikingly different. On his Facebook, he recounts how he said things went down.

“She asked to meet me, and I met her in the condition that we’d talk instead of fighting as I avoid physical violence, especially against someone smaller than me or physically fragile,” he writes. “She showed up with the full intention of attacking me, and sought to provoke me to fight by calling me homophobic slurs, then when I didn’t respond violently as she wanted me to, she threw my hot tea at me, and I threw the empty paper cup back at her.”

He then explained on Facebook, from his perspective, what happened during the portion of the video that the viewer is unable to see:

I was in shock, and as she walked out I cursed her out for assaulting me, and to that she responded by attacking me with pepper spray, and to that all I could do was kick randomly to get her to stop assaulting me. In the video she made, she can be heard screaming “cover yourself bitch”! and then laughing at the end of the video, which makes me believe she went there with the full intention of assaulting me. Later on I learned her sister was with her, waiting for me to actually hit this girl to come and stab me, and the girl has a concealed gun she might or might not have carried with her at the time. I showed up unarmed.

Snow said she hasn’t involved the police, but Dei writes that the issue is being investigated and that he “did press charges against her for assault and battery, and possibly a hate crime (since she called me homophobic slurs).”

A spokesperson for the Houston Police Department confirmed to the Daily Dot that a report has been filed by a Carlos Pacheco (presumably Dei’s real name), who said he met a woman at a Starbucks on Post Oak Boulevard in Houston on Tuesday at approximately 3:15pm CT. Pacheco alleges the woman threw a cup of coffee on him, ran from the Starbucks and then maced him. As it is an ongoing investigation, they were not able to confirm the identity of the suspect.

According to Snow, she has not yet been contacted by Houston police, and the outcome remains unclear.

“Unfortunately I don’t think the ordeal has changed anything about his behavior,” she observes, and she hopes to not find herself in a situation like this again. “I don’t plan on letting things get this out of hand in the future. Facebook has block for a reason.”