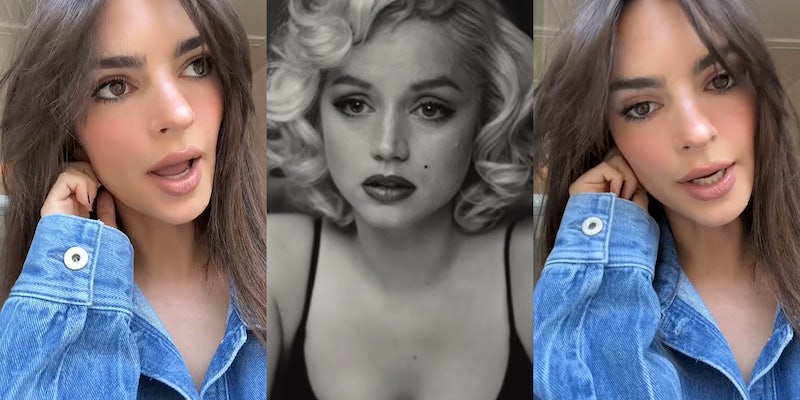 'It’s no coincidence female poets get notoriety after they die and experience violent ends.'

Netflix’s latest “Blonde” film, starring Ana De Armas as entertainment icon Marilyn Monroe, has become the subject of controversy as its NC-17 rating has divided viewers: scenes centering around abortion, sexual abuse, violence, and graphic nudity have caused an uproar online, and model/actress Emily Ratajkowski is yet another individual who has voiced their displeasure with the movie.

Although she says she has yet to see it, Ratajkowski mentions in a viral TikTok that what she’s heard about the movie has been less-than-flattering and that it further perpetuates harmful theatrical tropes involving women.

“So I’ve been hearing a lot about this new Marilyn Monroe movie ‘Blonde’ but I’m not surprised to hear that it’s yet another movie fetishizing female pain, even in death,” the actress starts. “We love to fetishize female pain. Look at Amy Winehouse, look at Brittney Spears, look at the way we obsess over Diana’s death, look at the way we obsess over dead girls and serial killers watch any CSI episode and it’s like this crazy fetishization of female pain and death.”

Ratajkowski continues that as a woman, she herself has learned to fetishize her own pain and hurt throughout her life so that it can seem “sexy.”

“I want that to change,” she says in the video. “But I was thinking about it and you know what’s kinda hard to fetishize? Anger. Anger is hard to fetishize, so I have a proposal. I think we all need to be a little more pissed off.”

So done with the fetishization of female pain and suffering. Bitch Era 2022

Ratajowski’s statements sparked a litany of responses on TikTok, with some folks supporting the model’s comments.

“It’s no coincidence female poets get noteriety after they die and experience violent ends,” one user wrote.

“Unfortunately, as a Latina, anger is definitely fetishized too, it’s “spicy,”‘ another shared.

“They didn’t do Elvis the same way it’s so unfair,” a third wrote.

However, on Twitter, where the video was crossposted by Pop Base, others highlighted “problematic” choices Ratajkowski has made herself.

“She says this but she supported the show ‘Slave Play’ which literally fetishised the abuse of Black people,” one user wrote.

“What about how black women are treated in America? ….. oh ok,” another said.

Others also highlighted that Brad Pitt is listed as one of the film’s producers, and many suggested the actress speak with the “Once Upon a Time in Hollywood” actor as many are speculating the two are seeing one another in a romantic capacity.

The Netflix film is based on the fictionalized book of Marilyn Monroe’s life written by Joyce Carol Oates, who calls herself a feminist, but has made a clear distinction between labeling herself a “woman writer” versus “a woman who writes” (she prefers the latter).

Oates herself speculated that the film would be divisive. Many critics of the film, like Ratajkowski, have expressed ire that the movie contains scenes that show the movie’s central character having conflicting feelings on abortion, being subjected to sexual assault/harassment, and heavily using barbiturates in the months leading up to her death.

Since both the Blonde novel and film are fictionalized versions of Monroe’s life, many viewers were upset that uncomfortable scenes depicting her being subjected to and reconciling with abuse were created purely for shock value.

One scene in particular that touches on a rumored abortion that haunted the Hollywood star was criticized by Planned Parenthood and other viewers who argued that the film took a strong anti-choice stance.

“I had the extreme misfortune of watching Blonde on Netflix last night and let me tell you that movie is so anti-abortion, so sexist, so exploitative. CanNOT recommend it LESS. Do not watch. The abortion scenes in particular are terrible, but so is the whole entire movie,” wrote researcher Steph Harold.

Caren Spruch the national director of arts and entertainment for Planned Parenthood released a statement to The Hollywood Reporter that touches on Blonde’s abortion scene: “As film and TV shapes many people’s understanding of sexual and reproductive health, it’s critical these depictions accurately portray women’s real decisions and experiences. While abortion is safe, essential health care, anti-abortion zealots have long contributed to abortion stigma by using medically inaccurate descriptions of fetuses and pregnancy. Andrew Dominik’s new film, Blonde, bolsters their message with a CGI-talking fetus, depicted to look like a fully formed baby.”

Spruch continues that “false images only serve to reinforce misinformation and perpetuate stigma around sexual and reproductive health care… It is a shame that the creators of Blonde chose to contribute to anti-abortion propaganda and stigmatize people’s health care decisions instead.”

“People are obviously concerned with losses of freedoms, but, I mean, no one would have given a shit about that if I’d made the movie in 2008, and probably no one’s going to care about it in four years’ time. And the movie won’t have changed. It’s just what’s sort of going on,” he told TheWrap.

Oates found folks who criticized the movie as being anti-feminist ironic as she believes the movie highlights how female predation has existed in the film industry for decades, especially with one of the country’s most celebrated cinema icons: “I think it was/is a brilliant work of cinematic art obviously not for everyone. Surprising that in a post #MeToo era the stark exposure of sexual predation in Hollywood has been interpreted as ‘exploitation.’ Surely Andrew Dominik meant to tell Norma Jeane’s story sincerely.”

The Bulwark’s take on the movie is that it doesn’t go deep enough into who Norma Jeane, Monroe’s original name, is as a person and that the movie doesn’t break any new ground; that it paints Marilyn as a woman who was born to suffer and that Dominik’s filmmaking is excessive and showy purely for the sake of being excessive and showy.

“That Dominik has no interest in the reality of Norma Jean’s life is fine; that Blonde is prurient in its interests is also fine. Artistic license and all that,” the reviewer wrote. “That Dominik uses that license to say nothing particularly interesting or new about the cruelties of fame, hammering home at the same point relentlessly, is less fine. That viewers feel every single one of its 166 minutes is its biggest sin. Blonde is excessive in nearly every way, the Netflix production more than earning its NC-17 rating…Blonde’s harshness may be the point, but it’s not pleasant to endure.”