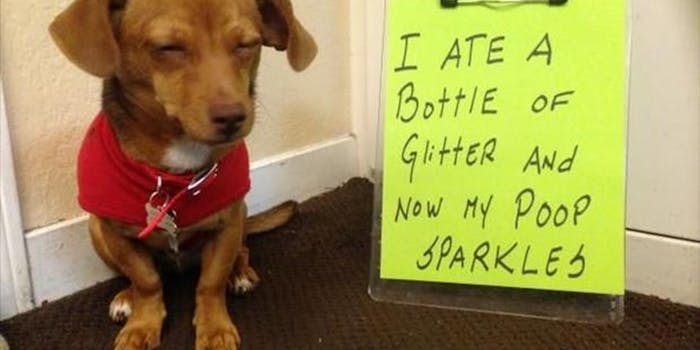 Will your poop really sparkle if you eat glitter pills?

The truth behind the bizarre Etsy trend.

You may have heard recently about glitter pills, one of the many weird products for sale on Etsy. Available from multiple sellers, including one Germany-based seller called “Sh*tGlitter,” the pills are edible gel caps filled with non-toxic craft glitter.

Though all the sellers marketing the glitter pills insist they are meant for decorative purposes only and not for consumption, the true purpose of them, hidden beneath a wink and a nod, is to make your excrement sparkle.

But are they safe? And if so, would it really make your sh*t shine?

The Daily Dot reached out to multiple toxicologists and regulatory agencies to try and understand what it means for a craft product to be labeled non-toxic, and what might happen if an adult were to ingest glitter pills. While no one was willing to comment on the product directly, they did point to the rules and regulations for an art and craft supply to get a “non-toxic” label in the U.S.

The label is determined through a rigorous testing procedure outlined by the the U.S. Consumer Product Safety Commission under the Labeling of Hazardous Art Materials Act.

Simply put, non-toxic means that if the product is absorbed through the skin or ingested, it won’t poison you in either the short or long term. That doesn’t exactly mean it’s digestible though. Art crafts ingested may pass through your system without making you sick, but your body won’t necessarily process them like it does food items.

Frankly it’s not clear what would happen inside the body if you ingest glitter. Sadly, we couldn’t find any reports of people who’d thrown caution to the wind and taken the pills. In fact, there are quite a few negative reviews of one seller on Etsy where users complained that the pills came with a warning not to consume them.

If you’ve ever owned a dog or had a kid, you’ve probably realized, however, that the non-toxic label is no joke.

On a family vacation recently, my 2-year-old nephew was contentedly coloring away on the coffee table of the beach house the family had rented. For what felt like two seconds, both my brother-in-law and I looked away from the kid, only to turn back and find him grinning with orange globs of non-toxic crayon stuck to his teeth. He was fine, of course. He wasn’t the first toddler to ever to test if crayons are as tasty as they look—and he won’t be the last. My brother-in-law, unfazed by the incident, then recounted a story of a time where his childhood dog had eaten the entire box of 64 crayons (save for the metallic gold and silver ones) and proceeded to poop rainbows for days after.

In this blog post, pediatrician Tobi Amosun tells the story of a time where she discovered her own toddler had downed some glitter by being surprised by a diaper full of gold sparkle.

Last Christmas, I was working on crafts and I put some of my supplies off to the side. I made sure to put away things like the scissors and the hot glue gun where my toddler couldn’t reach. I totally thought I was in the clear until a few days later, when I was changing his diaper. Usually this is a mindless thing where you grab wipes, the changing pad, a diaper and just go through the motions.

But what’s this? Sparkles?

Yes. Sparkly poop. My mischievous toddler had eaten the gold glitter. I personally think he wanted to be extra festive for the holidays.

Amosun said nothing bad came of the incident. She wasn’t even that worried. However, this should not be taken as an endorsement to eat glitter—just as anecdotal evidence that it may not harm you.

But it’s also not clear that taking the glitter pills will guarantee a toilet bowl full of festive twinkle.

According to Vocativ, customers of the now defunct store, EatGlitter.com often complained to the seller that the glitter pills did not, in fact, make their bowel movements sparkle. This implies at least a few people tried it and lived to tell the tale. Vocativ also had more luck than we did reaching a physician willing to comment on the pill. “I don’t think [eating glitter] is medically advisable. Nor do I think there’s any evidence that it’s ill-advised,” David Cromwell, an assistant professor of medicine at Johns Hopkins University, told Vocativ.

And that’s the best evidence we’ve got. While the Daily Dot does not endorse or even suggest any of our readers consume these glitter pills, we would love to hear about your results if you tried it. Just no photos, please.

Photo via Adam Rifkin/Flickr (CC BY 2.0)