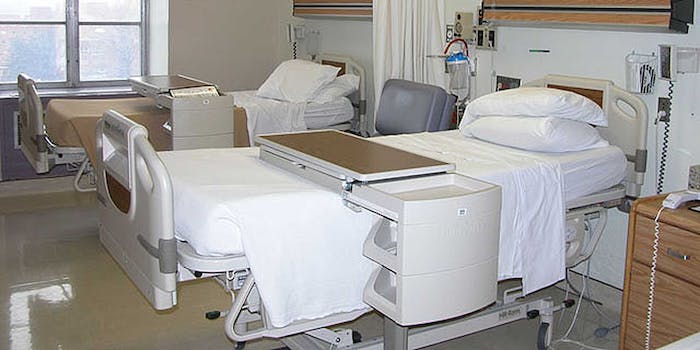 "Not only was the child not being treated, the child was dead."

In a federal civil rights lawsuit filed earlier this week, a Pittsburgh reverend, who has spent years actively campaigning against violence in his community, claims he was unjustifiably shot with a stun gun by police while trying to pray over the body of his dead stepson at an area hospital.

In June of 2012, 23-year-old Mileek Grissom was shot in the East Carnegie neighborhood of Pittsburgh while trying to break up a street fight. Grissom was taken to the University of Pittsburgh Medical Center Mercy hospital, where he was visited by his step-father, Earl Baldwin Jr., who is a reverend at the Ebenezer Missionary Baptist Church.

Security camera video from the hospital, as presented in this local news segment, shows what happens next:

Baldwin can be seen crying over his step-son’s motionless body when a group of police officers attempt to pull him off. After a few seconds, an officer shoots Baldwin with a stun gun. “I needed to tell him his family was going to be OK,” Baldwin told WPXI. “I was going to do everything I could to make sure they were OK.”

Hospital officials have insisted that Baldwin was interfering with efforts to revive Grissom; however, a representative for the family disputes that account. “Not only was the child not being treated, the child was dead.” Baldwin’s attorney Joel Sansone told WPXI.

Grissom’s mother, Tori Baldwin, says she was stopped by police outside of the hospital and not allowed to see her son.

UPMC has released a statement reading:

Clearly this was a stressful situation and a tragic loss for the family. However the allegations about the circumstances are inaccurate.”

Baldwin is a longtime anti-violence activist. At a march earlier this year memorializing a store owner who was killed during a robbery, he gave a speech during which he pulled out a fake gun and fired it into the air as a way to get focus that assembled crowd’s attention on the violence that was plaguing their community. “What family is going to be here next? Nobody knows that right now,” WTEA reported Baldwin saying during his address. “But if we become proactive instead of reactive, maybe we change the atmosphere in our community.”

Bladwin’s suit isn’t the only legal action the city of Pittsburgh is facing as a result of its use of stun guns. Just this week, area car salesman David Fields sued the city over a 2013 incident where he was shot with one during a dispute with officers over a parking citation.

“[The city’s] failure to supervise and/or train its officers has led to numerous unlawful use of excessive force incidents against citizens in the city of Pittsburgh,” wrote Sansone, who is also representing Fields, in the complaint.

Sansone has a long record of representing the families of the victims of police brutality in civil rights lawsuits. Sansone helped the family of a unarmed 12-year old boy who was fatally shot in the back by two Pennsylvania State Troopers in Christmas Eve in 2002 get a $28 million award for the use of excessive force.