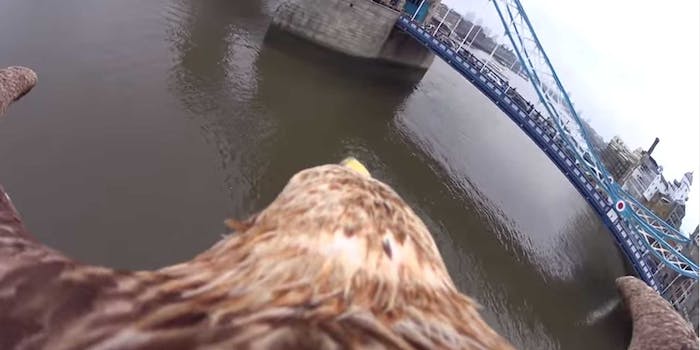 A camera-equipped eagle is soaring over London and Paris

The International Union for Conservation of Nature (IUCN) wants you to think of the birds—specifically, the eastern imperial eagle, or Aquila heliaca, which the IUCN lists as a vulnerable species. To raise awareness of the eagle and other endangered species, the IUCN attached a camera to an eastern imperial eagle’s back and sent it soaring across London for some remarkable views.

The brief video is part of the celebration of the IUCN Red List of Threatened Species, which is celebrating its 50th year of tracking endangered birds, reptiles, mammals, and many other kinds of creatures.

The eagle, named Darshan, visited sites like St. Paul’s Cathedral and the Tower Bridge to promote the launch of an art exhibit called Here Today, which “will showcase contemporary art featuring threatened species in a wide variety of media including paintings, sculptures, videos, dance, music, and photography.”