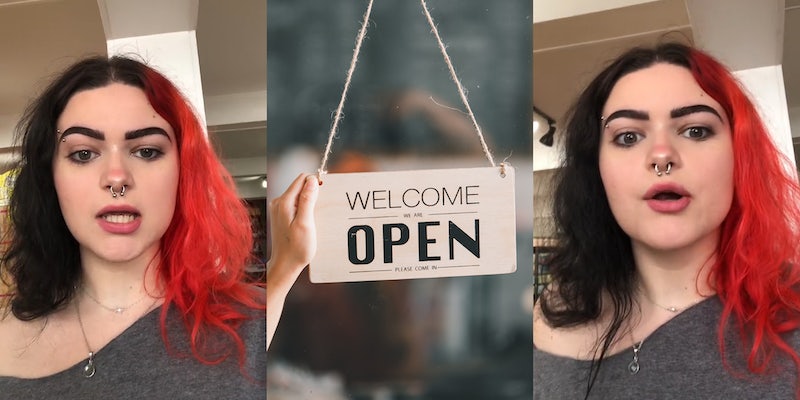 ‘Why can’t people wait 2 f*cking minutes for me to open up shop?’: Worker blasts over-eager customers waiting for store to open

'The second I open the door to put a sign outside they push past me.'

One worker has had enough of customers badgering employees when it comes to opening up shop.

TikToker @cuntlycactus called out such customers in a recent video.

“I’m sorry you can’t wait two fucking minutes for me to turn the lights on and open the register,” @cuntlycactus says in the video. “So I always just try to act like I don’t see them while I’m opening up shop and then the second I open the door to put a sign outside they push past me.”

The TikToker didn’t reveal what type of business she worked at, but she says customers usually pester her about once a week as she’s trying to open up the store.

and they never buy anything either, i dont get it

“Like this dude just stared me the fuck down for like five minutes while I open up shop and I didn’t even turn the signs to say open He just pushed past me to get in,” they say.

One commenter asked @cuntlycactus why she just doesn’t tell customers to wait five minutes for her to open. “Because they always try to pull some shit, it’s better to ignore them until I’m on the clock,” the creator responded.

Workers who related to the TikTok chimed in the comments on why they think some people are too eager for stores to open up.

“Because some people think the universe revolves around them, and everyone that isn’t them are NPC’s,” one person wrote.

Another recounted a similar experience they had.

“I have had people literally OPEN our gate when we were counting out the registers during close and when we said we are closed they said ‘oh I know,’” another commenter said.