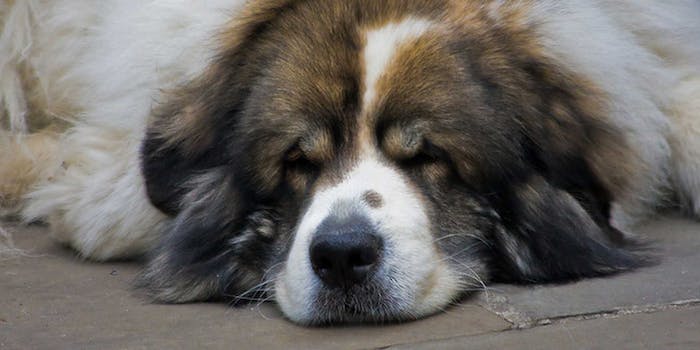 Dying St. Bernard plays in the snow one last time

A St. Bernard with bone cancer needed to be put down. But first, she played in the snow.

Just as terminally ill children are often granted last wishes, so are dying pets. Such is the case with Sophia the St. Bernard, who spent her final hours doing something she loved.

Six-year-old Sophia was diagnosed with bone cancer two months ago. Her owner, Alyson Page, wanted to do something nice for her before she was put down, and reached out to the Chill Factore indoor ski centre in Manchester, U.K., to see if they could help.

“She absolutely loves the snow, so I sent an email cheekily on the off-chance, I never expected them to be so kind to let us come and bring her,” Page told Manchester Evening News. She received a message from them on Monday, and the timing couldn’t have been more perfect. “We got a reply yesterday and it was just before we were due to have her put to sleep, so it was just amazing.”

Warning: we recommend you have a box of tissues handy. Maybe two boxes.

Sophia was a beloved family member, staying by Page’s side during the difficult process of in vitro fertilization. Page was eventually able to conceive her now eight-month-old daughter, but says she couldn’t have done it without her loyal pooch. “Sophia was my rock throughout stages of IVF treatment,” Page said. “We went through years of infertility, so she has been a big support for me and I wanted something special for her.”

A tail-wagging Sophia got a chance to roll in the snow and lick up snowflakes with her five-year-old half brother, Yogi. After her wonderful day playing, she was put to sleep.

Of Sophia, Page said: “She is a massive part of our life and I can’t even begin to say how much we’re going to miss her, but it has made me happy to know she has had a wonderful day today.”

We’re really sorry if this broke your tear ducts.