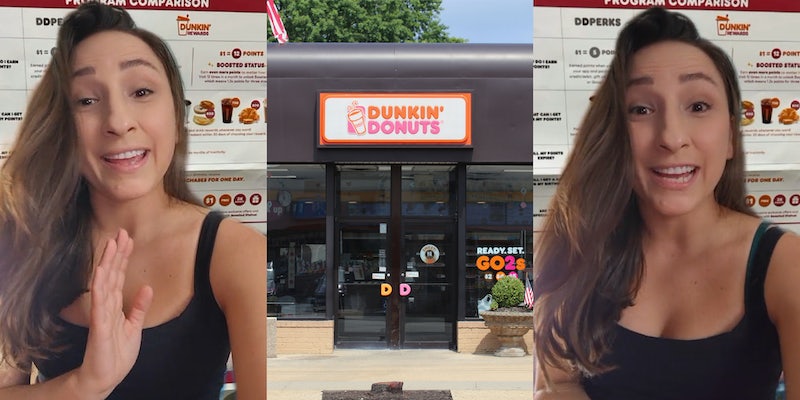 'For the amount of garbage drinks I’m served, it’s not worth that many points for a free one.'

A woman on TikTok is “very disappointed” with Dunkin’s new rewards system, and she suspects that other customers will be, too.

Dunkin’s new rewards system, which is being renamed from Dunkin’ Perks to Dunkin’ Rewards, comes with a number of changes. Rewards members will receive 10 points for every $1 they spend, up from 5 points for every $1 in the old program. Plus, they can start redeeming rewards after 150 points instead of 200, and use those points toward food for the first time, CNN reported.

The TikToker says being allowed to use points for food orders is the only positive aspect of the new system.

But the number one “con” is that customers don’t get a free birthday drink anymore, the TikToker says. Instead, they’ll get three times the points for anything they order on their birthday.

“Whoever on the Dunkin’ team thought this was a smart choice for the new rewards system, I think you should reevaluate it,” the TikToker says in her video. “Not gonna be a lot of happy customers out there.”

The company decided to change its rewards system because its members “deserve more,” according to its website.

“Dunkin’ Rewards is designed to help keep you running all day long with the best that Dunkin’ has to offer. You can now redeem your points on most menu items, including food and drinks,” the company states on its website.

Many viewers seemed to side with the TikToker, sharing their disappointment at the new rewards system in the comments.

“For the amount of garbage drinks I’m served, it’s not worth that many points for a free one,” one viewer commented.

A third wrote, “this legitimately changes my entire life.”

Some viewers said they plan to go elsewhere for their coffee now—especially on their birthdays.

“Guess I’ll be switching back to Starbucks… they are almost the same price now too,” one user said.

“That’s okay starbucks got me with my free bday drink,” another user wrote.

The Daily Dot reached out to the creator via TikTok comment and to Dunkin’ via email.