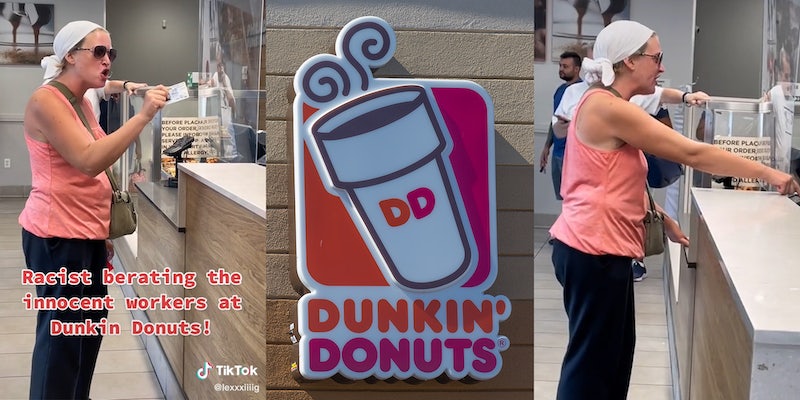 ‘Over donuts…’: Karen demands Dunkin’ workers pick up her credit card, tells them she’ll call ISIS on them

'How is no one reacting, bro.'

A woman was captured yelling at Dunkin’ employees and telling them she’ll “call ISIS on” them in a viral TikTok.

In a TikTok posted by Alexis Isabel (@lexxxiiiig) on Aug. 30, a white woman berates Dunkin’ employees. The video begins with the woman yelling that she is going to “call ISIS on [their] ass.” She also says she wants her “fuckin’ receipt” and her “fuckin’ donuts.”

“I paid for ’em; they’re mine,” the woman says of the donuts. “I want a dozen fucking donuts, now.”

The woman also says she’s already called the police when an employee tells her they might have to contact authorities and yells at employees to pick up her credit card when she drops it in front of them.

“I ain’t going nowhere, bitch,” the woman says to a Dunkin’ employee. “You suck my dick.”

At the end of the video, the woman takes out her phone, saying she’s calling the police. The video seems to have been filmed in one of the franchise’s locations in Philadelphia, Pa.

In the video’s caption, Isabel wrote that the woman was “even worse” before she began filming her.

“I snapped on her but had to shut up bc I’m 6 months pregnant,” Isabel wrote in the video’s caption, implying she was worried about her own safety. “Made me so mad bc these people work so hard to start our days off right and don’t deserve this treatment!”

On Wednesday, Isabel’s video had over 10 million views.

@lexxxiiiig She was even worse before I started to record. I snapped on her but had to shut up bc I’m 6 months pregnant. What an awful and disgusting “human being” made me so mad bc these people work so hard to start our days off right and don’t deserve this treatment! #racistcheck #racistsinthewild #racistwhitewoman #racistkaren #dunkindonuts #karen #racist #racistoftheday #dunkindonutskaren #karensoftiktok #phillykaren #karensgoingwild ♬ original sound – Alexis Isabel

Many commenters on Isabel’s video were confused why no one stepped in to aid the employees being yelled at.

“What I don’t understand is why the ppl that just sit there silent and record,” @ginger_snap419 commented. “Instead of sticking up for the innocent worker.”

“Come on, people. I promise it only takes ONE person to stand up to people like this, and more will always join in,” @bigwoof.and.littlefloof wrote. “Speak the hell up.”

Others discussed the consequences they thought the woman should face and referred to the woman as a “Karen.”

“She should be banned from DD forever,” @carleenrenee0 commented.

“Let’s find her employer, show them the video and let them know that she was having a bad day just in case she showed up angry today,” @sarahbispy wrote.

“I would have given her money back and said bye Karen,” another said of what they would’ve done had they been the worker.

The Daily Dot has reached out to Isabel via Instagram direct message and Dunkin’ via email.