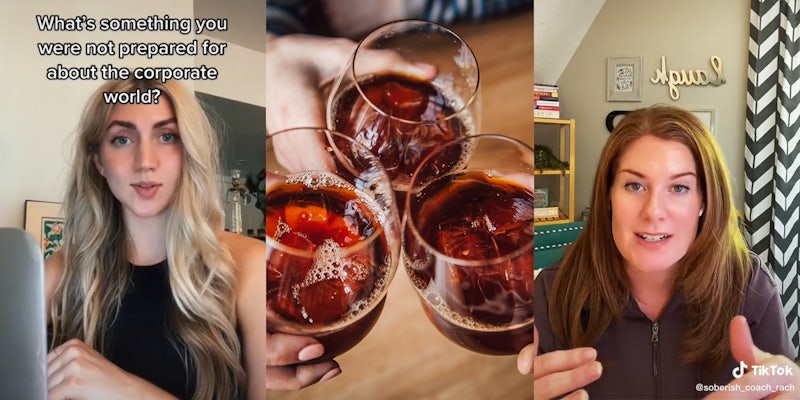 ‘To get there, you almost have to be a drinker’: Worker says drinking culture is ‘normalized’ in executive-level positions

'I got told off for not going out with colleagues AFTER I already had gone to Happy Hour.'

A worker says that she was “shocked” by how “normalized” drinking was in executive-level positions in the corporate world in a now-viral TikTok.

In a stitched video by Rachel Pritz (@soberish_coach_rach) on Sept. 7, she says that noticed how prevalent drinking was in corporate socializing after entering an executive-level role.

“We bragged about bottles of wine the night after a really tough meeting. We bragged about the bourbons we drank. Drinking is very normalized in the executive world,” Pritz says in the clip. “If you want to get there, you almost have to be a drinker because you have to go out for the dinners and the drinks and the conferences where everyone is drinking. If you don’t partake, you oftentimes won’t get invited.”

The video has reached over 1.2 million views as of Sept. 8, with other executive-level workers sharing their experience with corporate drinking expectations.

“I am sober and just entered an executive-level position in the world of consulting. Let me tell you. GIRL LET. ME. TELL. YOU,” one user wrote.

“I got told off for not going out with colleagues AFTER I already had gone to Happy Hour + dinner,” another said.

“One time I didn’t go to an after-work event at a brewery and went to yoga instead and it got brought up in my 6-month review,” a third added.

Others shared their tips for avoiding alcohol at corporate social events.

“I always ordered mocktails, told the waiter to get me a sprite+cranberry in a short glass. Nobody questions it and it’s great people watching+bonding,” one commenter said.

“Retired exec taught me: just get plain Coke, but when people ask what you’re drinking tell them rum & coke,” another wrote.

The Daily Dot reached out to Pritz via email.