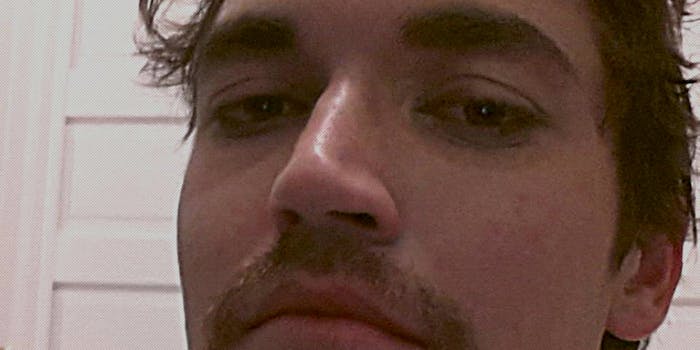 The owner of the Web's biggest illegal drug market had a totally typical online presence.

Following a trail of online footprints, a picture of the man previously known only as Dread Pirate Roberts is beginning to emerge.

According to his LinkedIn page, Ulbricht is a native of Austin, Texas, who got his undergraduate degree from the University of Texas at Dallas and then became a research assistant at the Pennsylvania State University School of Materials Science and Engineering. Ulbricht, who was charged with selling methamphetamines, among many other drugs, specialized in “rare properties in crystalline materials.”

In an interview posted on YouTube late last year, Ulbricht chatted with his “best friend,” Storybox CEO René Pinnell, about moving to San Francisco in mid-2012. Prior to his move, Ulbricht worked at Good Wagon books, a service reselling used books donated by members of the public.

“I feel like the world is in flux for sure, I’m really fascinated to see how it all plays out 200 years from now,” he says in the interview. “I want to see where all this new technology goes and see where all the different powers and different interests … like with the Internet evolving and the U.N. telecommunications department trying to create global rules of the Internet.”

As Business Insider points out, Ulbricht once posted a manifesto on his LinkedIn page about the lofty goals he hoped to accomplish, presumably using the Silk Road as a means toward the betterment of all humanity:

I want to use economic theory as a means to abolish the use of coercion and agression amongst mankind. Just as slavery has been abolished most everywhere, I believe violence, coercion and all forms of force by one person over another can come to an end. The most widespread and systemic use of force is amongst institutions and governments, so this is my current point of effort. The best way to change a government is to change the minds of the governed, however. To that end, I am creating an economic simulation to give people a first-hand experience of what it would be like to live in a world without the systemic use of force. 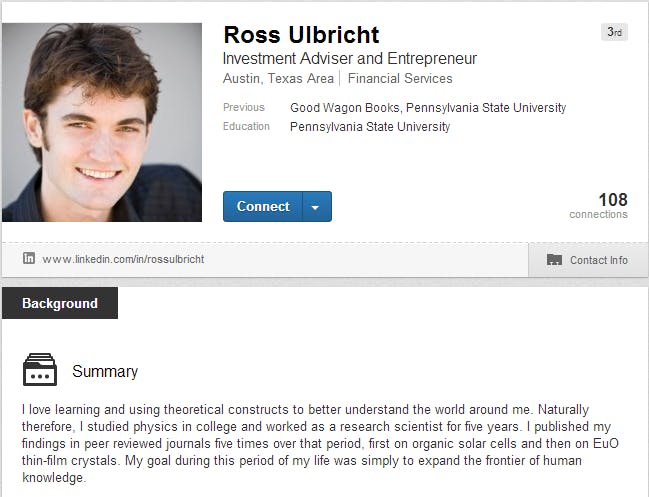 The utopian libertarian sentiment expressed in this manifesto dovetails with evidence released by the FBI, which showed Ulbricht’s enthusiasm for the Ludwig Von Mises Institute, the self-proclaimed “world center of Austrian economics.”

On his YouTube account, Ulbricht posted a video of a lecture by Mises scholar Robert P. Murphy on “The Market for Security.”

On a Bitcoin community forum, a user with the same email address listed on Ulbricht’s LinkedIn page posted a job advertisement seeking “the best and brightest IT pro in the Bitcoin community to be the lead developer in a venture backed Bitcoin startup company.”

A reply to that advertisement addressed the original poster as “Ross.” The job advertisement would later lead the FBI to Ulbricht’s door.

Bitcoin is an encrypted electronic currency that was the de facto unit of exchange used on the Silk Road.

According to Department of Justice documents, when Ulbricht was arrested, authorities seized $3.6 million in Bitcoins. In another post on the Bitcoin forum about a rally in the Bitcoin market in mid-2011, a user with the same email address wrote, “I don’t think I’m a millionaire… yet.”

UPDATE: An employee at the non-profit group Explore Austin told the Daily Dot that Ulbricht purchased Good Wagon Books from its founder, who also worked at Explore Austin, at least two years ago. After the sale, Good Wagon quickly went out of business.