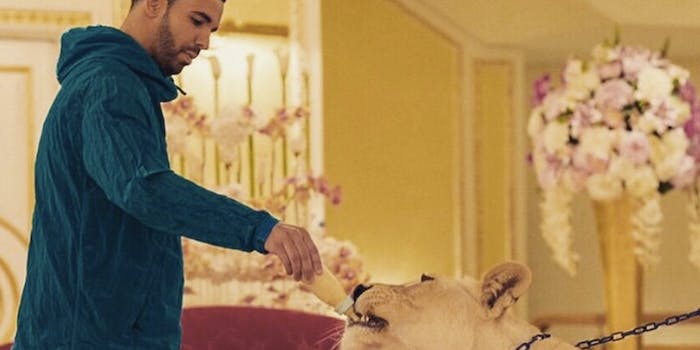 He also saw a monkey named Rambo drive a four-wheeler. But that's not important right now.

When some people go on vacation, they swim with dolphins. When Drake goes on vacation, he feeds lions. Really big lions.

After dropping a surprise smash album and completing an Australian leg of his tour, Drake decided to take a well-deserved break and buy a ticket to Dubai. So after casually being taken around the city in a helicopter, followed by some light off-roading through the desert, Drake went to pet some animals at his friend Latifa Rashed Al Maktoum’s compound.

He got to feed a lion some milk.

Drake is no stranger to exotic animals. Although it was never officially confirmed, he was once rumored to have had a pet ocelot. But now, Drake is officially the king of big cats.