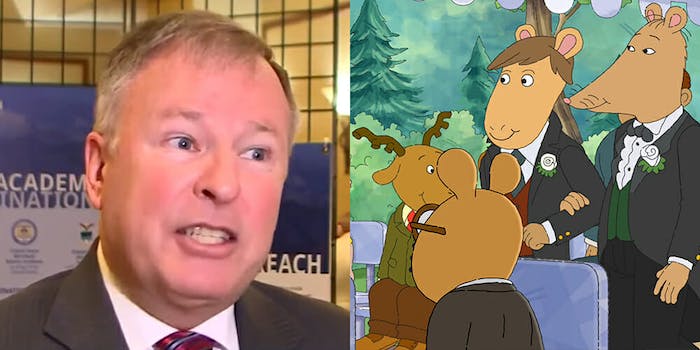 He says an episode of 'Arthur' is an ‘affront to religious Americans.’

You may have thought conservatives were done crying about Mr. Ratburn marrying a man on the long-running children’s cartoon Arthur, but Rep. Doug Lamborn (R-Colo.) is shouldering that tear-stained mantle with a bill to defund PBS.

Lamborn, the representative for Colorado’s 5th district in the House of Representatives, introduced a bill on Monday to end all federal funding for PBS, claiming that it’s being used to impart liberalism onto young children against their parents’ wishes. “Taxpayers now know with complete certainty that the goal of the PBS cartoon is to impart social liberalism to children,” Lamborn wrote for the Daily Signal. “Enough is enough. It is time to stop sending our hard-earned tax money to support programming that is objectionable to many Americans.”

The episode of Arthur that Lamborn thinks proved this pernicious agenda showed Arthur’s teacher, Mr. Ratburn, getting married to his husband. “Parents and churches should be the ones discussing marriage and family with their children—not PBS,” Lamborn wrote. “To target children in this way is a complete affront to religious Americans.”

Despite what Lamborn says about the many offended Americans, the show’s creator Marc Brown says the episode reception has been extremely positive. “It made me feel great that we were able to do something that was really helpful to so many people,” Brown said. “Art reflects life, life reflects art, and kids need to see what’s happening in the world.”

The episode was also beloved online for the memes bourne out of homophobes’ responses to it. After a news story said the entire state of Alabama would not broadcast the “gay rat wedding,” the phrase became a giddy joke among the LGBTQ community online.

Lamborn says that showing a perfectly legal gay wedding is “objectionable to many Americans,” but if he thinks he’s representing his constituents, he may want to check again, because 71% of Coloradoians support gay marriage. The bill does not have any co-sponsors in the House, but it at least has the support of Reverand Franklin Graham, who infamously blamed Hurricane Katrina on “sexual perversion” and the LGBTQ community in New Orleans.