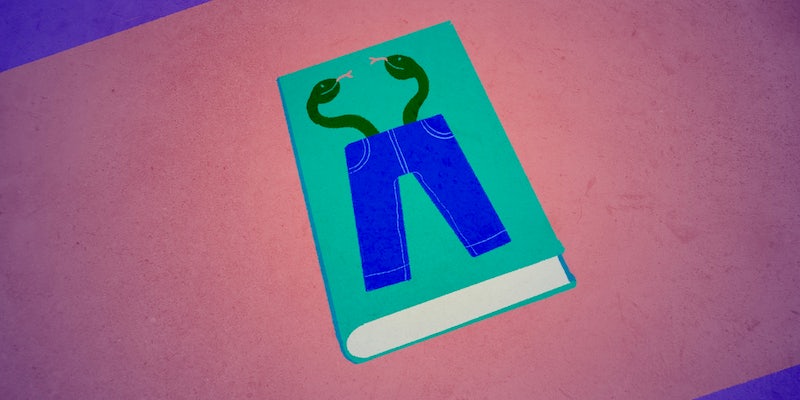 Double Dick Dude shares the literal ins and outs of his anatomy—and more!

He also has a book out! And he loves puppies!

As I open the file of a Skype interview with a man who has two penises, I notice that the recording application automatically saved it as “incoming from diphallicdude,” and I laugh because there is no possible way for me to avoid turning this into a euphemism.

Chatting with Double Dick Dude, who now prefers to go by “Clark,” tests your maturity at the level of wordplay, and, as an adult woman with the humor of a 12-year-old boy, I passed with flying colors.

A couple of years ago, Clark came out on Reddit, and his Internet life, for better or worse, was inexorably changed.

After the attention he received that year, he self-published a short memoir, Double Header: My Life with Two Penises, which chronicles his experience as a man with a rare congenital disorder called diphallia. In this book, he includes references to a couple of sexual encounters, but it by no means covers the incredible come-drenched ground found in his second book, Double Stuffed: Steamy Tales from My Sex Life with Two Penises, which features 21 sex stories as only a man with two penises could relate. 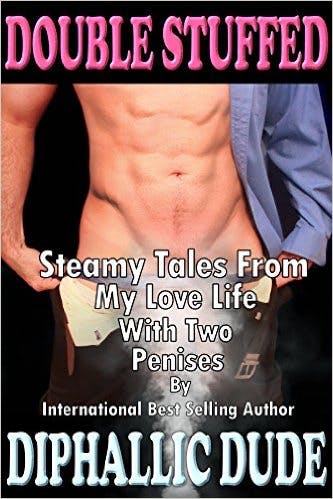 Released in January, Double Stuffed reads like much clichéd corny sex writing—with the exception of a diphallic man at its center, and the knowledge that this man supposedly, actually experienced the specific situations he recounts.

Many of the stories—11 of which describe sex with men and 10 with women—I found nearly unbelievable. How could someone with two dicks happen into situations with others who also have interesting or weird things happening with their bodies? Is it simply a case of like attracting like?

In one story, an older, erratic woman busts into the gas station bathroom where Clark is peeing, sees his two dicks, and asks him to fuck her. Clark discovers that she has the name of every person she’s ever had sex with tattooed on her labia and above her pierced clit that she calls her “pig”; she refers to her popped-out cervix (that he fingers) as her “pig snout.”

In perhaps the most ripped-from-porn tale in the series, though, Clark seduces a straight-identifying, virgin pizza-delivery guy, the romp ending after the guy eats Clark’s come from his own ass on a slice of a pizza.

In his Reddit AMA and in his first book, he describes having sex with six other people at the same time:

Clark is the first to admit that his life and many of these encounters are nearly fantastical. “I’ve been blown away by some of the people I’ve met and had sexual activity with,” Clark tells the Daily Dot. “There have been a number of people that completely shocked the crap out of me…I usually know how people will react to me—I’m not usually the shocked one.”

Summarize Clark’s life in one word, and that word is “excess”: In addition to his extra penis, Clark also has a very large prostate. Whereas the prostates of most men are the size of walnuts, his is the size of a lemon.

In order to avoid painful urinary complications, he had to learn how to milk his prostate at an early age. This medically necessary prostate massage has led him to experiment over the years with larger and larger objects to aid in his manual milking, creating an extremely loose asshole (and an extremely NSFW pic) that he can turn inside-out whenever he wants.

“You could probably park a bus in it and put it into a reverse a few items and I probably wouldn’t even know it,” he said. Clark admittedly loves his asshole and fully accepts the possibility of complications further down the road. “My doctor said to me that the only time there’s a risk for major complications is if I develop the inability to keep the inside of my colon and everything inside my body.”

“You could probably park a bus in it and put it into a reverse a few items and I probably wouldn’t even know it,” Double Dick Dude said about his butthole.

If Clark gets to the point where this is happening, he may need to have a surgery to disconnect his anal tract and remove excess tissue, which may require an auxiliary device post-surgery. Clark explains to the Daily Dot, “Believe me, I am not not naive or ignorant to the fact that through the past 10 to 12 years, what I’ve been doing has been medically damaging my body—I’m aware of that. But tell the people who chain smoke you’re gonna have a very high-risk cancer if you don’t quit smoking, and they’re gonna look at you like, ‘No kidding.’ You tell people who drink a lot that they’re killing brain cells and might end up with cirrhosis of the liver, well, duh. We all know that some of the things we enjoy doing could have negative impacts in the future.”

This idea of excess is the only thing that makes his sexual accounts seem plausible—that his body, defined by excess, could attract other varieties of excess, even if a potential partner isn’t aware of his two dicks until he’s de-robed.

In fact, while writing this piece, I had more trouble than usual editing down what I would include. How does one decide what to write about a man with two penises that hasn’t already been covered? How does one manage the excessive content of an excessive man?

When I interviewed Clark via Skype, we chatted for nearly four hours (sadly, my app only recorded the first 2.5 hours of our conversation—you can to listen to it on my podcast about bodies, The BodPod). I was overwhelmed with content about Clark. On the one hand, I wanted to talk at length about his two penises; on the other, I wanted to find out who he was when he wasn’t “Double Dick Dude.”

Of all things, his biggest fear is either finding out there is a heaven and that he’s not allowed into the party or getting stomped on by an elephant.

Throughout his books and our interview, it was clear that he valued body positivity, something attractive (self-described, due to his anonymity), affluent white men likely don’t often consider. He had his first experience of feeling dehumanized by a pop-culture representation of his body after watching an episode of 2 Broke Girls that aired in January.

In the episode, one of the female characters goes on a couple of dates with a man who has two penises and is ultimately ridiculed for his condition and used as a punchline. Clark found this representation hurtful and wrote a lengthy op-ed in which he addresses his complaints (which you can read in its entirety here).

Though he does find levity in the fact of his body and its excesses, it is important that he has some modicum of control over it.

In January of last year, Clark had surgery to remove the suspensory ligament—the muscle that helps a penis stand up straight—because it was causing him pain and discomfort. Before surgery, his penises were not particularly large and one of them sort of stuck out on the side (NSFW pic). Once this ligament was removed, his penises dropped down, creating two much larger symmetrical penises (NSFW pic). Post-surgery, Clark enjoyed the look of his new two dicks so much that he decided he wanted the rest of his body to “match”—that is, he wanted them to look as “nice” for him as his two dicks. As a result, he frequents the gym and has attained the toned body on the cover of his second book.

Clark embraces everything about his body—from his two dicks to his stretched-out asshole—and frankly, I found his candor about his body refreshing. He was cheery and open and honest about his experiences, and I ultimately found myself feeling less queasy about the idea of certain sex acts and more engaged with the idea of the way bodies inform who we become. He had me wondering more about the capabilities of bodies and how they can adapt and endure according to biology and circumstance; how even when we assert that we are not our bodies, we are still fundamentally of them.

When “Clark” isn’t “Double Dick Dude,” his identity is pretty obscure, something he deliberately ensures. He did relay a few nondick-related facts: His favorite color is blue; he really likes puppies and helping old ladies cross the street; his biggest fear is either finding out there is a heaven and that he’s not allowed into the party or getting stomped on by an elephant.

For Clark, it is absolutely paramount that he remains anonymous because of the attention he would be sure to receive if he were recognizable. When asked if he thinks it’s plausible to assume that he’ll never be discovered, he asserts his confidence in the people he’s hired to secure his identity online and the relationships he has with people who are adamant about not exposing him.

In fact, Clark seems to relish the experience of a double identity, necessitated by his double penises, by comparing himself to his namesake, Clark Kent/Superman. (Which makes me think, if anatomy is destiny, what would Freud say about the doubled identity path of a man with two large, functioning penises and a blown-out asshole?)

One evening on the subway after his Reddit AMA in 2014, Clark glanced over to see people sharing pictures of his cocks and the thought occurred to him: This must be what it’s like when Clark Kent sees Superman making headlines. The crux of the superhero identity is that of a double existence, so this comparison is not without merit.

Indeed, a comic book about his life is set to be released by Class Comics, a publisher of primarily gay erotica. But Clark will not be portrayed as a superhero in this comic book—the publisher felt that his experiences were fantastical enough to illustrate, something with which I deeply concur.

His main concern with the publisher’s potential treatment of his life? That the artists won’t illustrate ALL of his body parts accurately. But the hungry, reading public can rest easy because Clark has been assured that his asshole would be portrayed as the giant, loose, red cavern that it has come to be. Thank God for that.