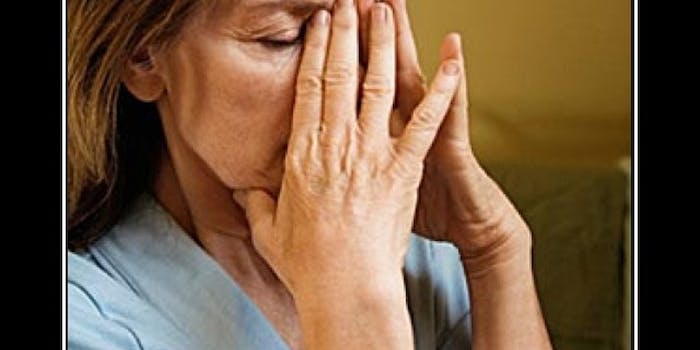 After readers pointed out that our list of the top 10 Twitter accounts of 2011 had omitted women, we set out to make things right.

If at first you don’t succeed, throw yourself at your readers’ mercy.

When we put together our list of the most important people on Twitter in 2011, we racked our brains, we checked follower counts, and we ransacked our archives for the most interesting names. The one thing we didn’t do, when all was said and done, was step back and consider the list as a whole before releasing it.

We praised our No. 1 Twitterer, NPR’s Andy Carvin, for his perspicacity. And sure enough, he instantly spotted our list’s biggest flaw: Somehow we hadn’t managed to name a single woman to the list. Facepalm!

We were as baffled as our readers were. (Our newsroom staff is nearly evenly split between men and women.) Sure, we’d included some collective accounts like @anonymousIRC, @TheOnion, and @OccupyWallSt which included women, but that’s no excuse—especially since we’ve written about numerous influential women using Twitter to raise their profiles and enlighten their followers.

We’re indebted to Rachel Sklar, who helped us turn to Twitter to make things better. Since our initial list had such an obvious flaw, we turned to you, our readers, for suggestions. We considered the nominations and arrived at five new names worth our consideration.

And your consideration. We’ll shortly be releasing a poll to the public, asking you to pick a new top 10 from our original list and these new contenders.

Forthwith, five unignorable Twitter users you should absolutely be following—according to you.

Breast cancer is a disease that affects hundreds of thousands of women (and men) every year.

While most people seek treatment for the disease in private, Boing Boing blogger Xeni Jardin decided to share her journey with the world.

About four weeks ago, Jardin, who at 41 is younger than most guidelines recommend for breast-cancer screening, but was motivated to seek an examination by friends’ recent diagnoses’, gave the world an intimate look into her life after she live-tweeted her mammogram. Jardin’s candid tweets inspired the Twitterverse to rally around the Internet-culture icon. In that light, her life is just one more networked object she shares with her hyperlinked audience, and we are all the richer for it.

Wortham is a stylish tech reporter for the Times whose Twitter account is filled with messages about video games, movies, and the latest tech news. Add to that the multimedia swirl of her Tumblr and Instagram feeds, and you get a picture of someone living the full promise of a life enabled by the gadgets, websites, and apps she writes about. And honestly? We’ve got a soft spot for her GIF animations, like a recent one of her friend’s wedding.

If 2011 was any indication, 2012 is going to be a fun and exciting year for Wortham. Don’t miss a single tweet.

Countless Twitter users have landed book deals, performances, and jobs thanks to the attention their tweets have received. But Kelly Oxford has them beat: Have your tweets landed you a TV show?

About a week ago Oxford, a writer and mother of three, had her single-camera TV comedy bought by NBC.

“This year I hustled and pitched like an asshole and left my kids with my family so I could meet with execs all over LA and this project came to fruition,” wrote Oxford on her blog following the announcement.  “I also wrote an entire book (not half a book).”

While Twitter was not the driving force behind the deal, it’s certainly the reason why Oxford has become a household name in the homes of celebrities like Howard Stern, Ryan Gosling, and Jonah Hill. Her unadulterated look into the life of a hardworking author and quirky sense of humor set her apart from the ordinary voices in your timeline.

Despite taking a Twitter break earlier this year, journalist Ana Marie Cox is still a force to be reckoned with on Twitter. Especially if you’re a politico.

Though it’s been years since Cox edited the likes of Suck.com and Wonkette, her sharp tongue hasn’t dulled. Her live-tweets of the Republic presidential debates are ripe with criticism, wit and insight that only one of the creators of the modern blogging vernacular can bring.

Journalist Maria Popova loves to pick people’s brains. She still does most of the gleaning on her successful blog Brain Pickings, but for the last four years, she’s moved some of the operation to Twitter. Nowadays, Popova primarily links to blog posts and other stories and occasionally shares her retweetable opinions on the news of the day. And when she does, as she recently did with a short film on author Maurice Sendak, she’s pretty spot on.