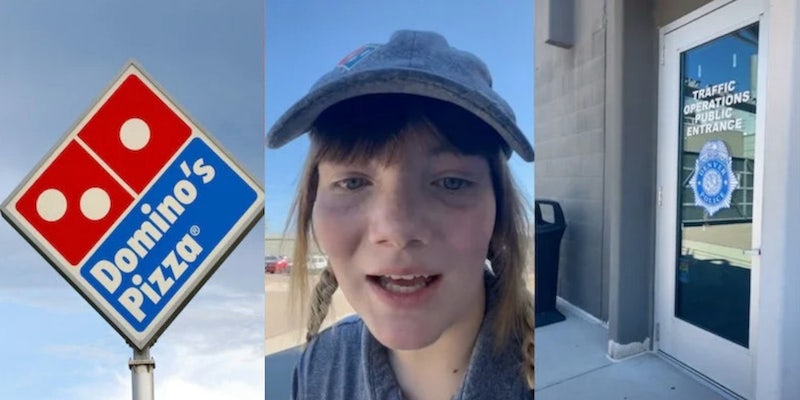 ‘I could have a bomb, and these people would have no f*cking clue’: Domino’s worker gets ghosted while trying to deliver to police station

'Girl why would you say that out LOUD!!!'

A Domino’s delivery driver says that when she was called to deliver an order to a police station, no one opened the door to receive it.

A TikToker (@idonotknowwhatiamherefor) who works for Domino’s posted a video on Aug. 27, saying that she arrived at a Denver Police Department station to deliver their order, but the doors were locked and no one answered her phone calls.

“I’m just some random person out here,” @idonotknowwhatiamherefor says in her video. “I could have a bomb, and like these people would have no fucking clue.”

In the video’s comments section, @idonotknowwhatiamherefor said that when she looked up the department’s number online, “it said they were closed.” She also joked that she hopes whoever was inside the building could hear her, but clarified that she didn’t have a bomb.

Many commenters chastised the TikToker for saying that she “could have a bomb” right outside a police department—because making those types of jokes can get you in trouble, even in the absence of an actual threat.

“Aaaaaand now you’re on a list,” one user commented.

“Girl why would you say that out LOUD!!!” another wrote.

“Plot twist you hear ‘GET ON THE GROUND,'” a third said.

Other commenters suggested that @idonotknowwhatiamherefor call 911 to get the department’s attention, and some shared their experiences as delivery drivers bringing orders to police and fire stations.

“That’s happened to me too,” one viewer wrote. “They never tip either.”

“That happened to me at a fire station once I just like… sat there,” a second claimed.

The Daily Dot has reached out to the Denver Police Department via email and @idonotknowwhatiamherefor through a TikTok comment.