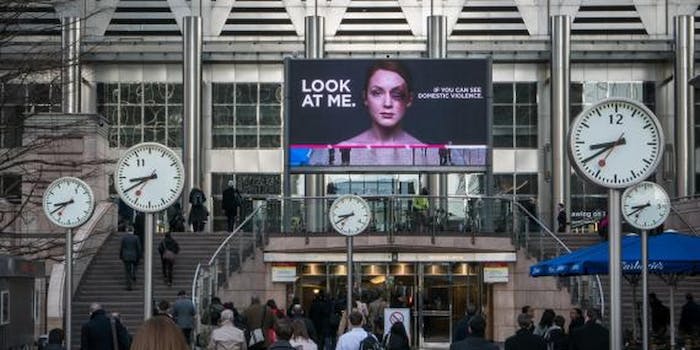 This interactive domestic violence billboard changes as people look at it

The London billboard was put up in honor of International Women's Day.

The billboard is posted in London’s Canary Wharf and depicts a female domestic violence victim. But the twist is that whenever people stop to look at it, the woman’s injuries get better.

The billboard utilizes facial recognition technology to pick up when people are taking a closer look. It’s a collaboration between London ad agency WCRS, the charity Women’s Aid and the photographer Rankin. The billboard was created in anticipation of International Women’s Day.

Polly Neate, the chief executive of Women’s Aid, told HuffPost UK that the billboard is intended to be startling and thought-provoking.

“Often people don’t want to see domestic violence or do something about it because it feels too difficult or they’re worried what they do won’t have any impact. They turn a blind eye because of this, leaving women isolated and making it even harder for them to get help.

We want to show this International Women’s Day that anyone can ‘Make it Happen’”, says Neate referring to the theme of International Women’s Day, “and everyone can help put a stop to domestic violence, by noticing it, by donating to Women’s Aid, and to making sure their communities don’t tolerate the sexist attitudes that lead to abuse. That’s what we hope to achieve with this advert.”

The billboard will be moving from London to Birmingham Bullring and Westfield London on Saturday, March 7th.