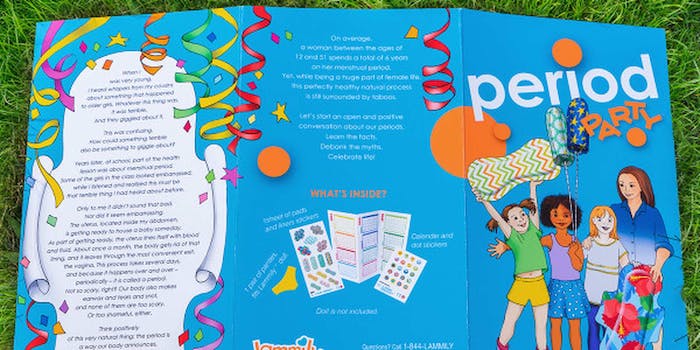 This realistic doll teaches children about the glory of menstruation

The Lammily doll is growing up.

It can be a struggle for parents to explain menstruation to their children. The Lammily doll, a doll with realistic body proportions, is stepping in to help ease that conversation via her very own ‘Period Party.’

Lammily was created via a Kickstarter crowdfunding in March of 2014. Creator Nickolay Lamm hoped to create a doll with the realistic body proportions of a real-life 19-year-old. Now, just like a real-life 19-year-old, Lammily will get her period with the Period Party, a $10 dollar Lammily doll accessory pack—available starting today.

The period accessories—”A fun way to explain the menstrual cycle to kids,” according to the Lammily site—are intended to make talking about menstruation easier. The ‘party favors’ include an educational pamphlet, a pair of panties to fit the Lammily doll, 18 pads and liners in different colors and prints to fit the panties, and a calendar with dot stickers to keep track of the doll’s cycle.

In promotional photos, Lammily doesn’t look bummed to have her period: She looks downright excited. Her pads are brightly colored with fun prints that could possibly make human women excited about their periods.

The educational pamphlet frames menstruation as something that should not be feared, but celebrated:

“Think positively of this very natural thing: the period is a way our body announces, Hey! I’m healthy! I am growing up! Consider how special having the period is: it means that one day, if you decide, your body may give life to a new person! Isn’t that a great reason to celebrate?”

A video promoting the Lammily Period Pack is reminiscent of the cringing embarrassment that often accompanies menarche, the first period, which is typically regarded as the central signal of puberty.

The Period Party looks like an interesting development for a realistic doll that already provides acne and cellulite stickers as accessories. A new doll, a Photographer doll who is Black, is also available for pre-order.

Now, if only we could get some of those fancy pads IRL.