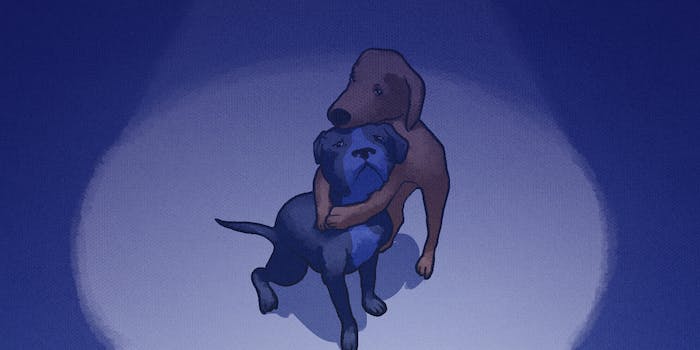 When these two puppies hugged in puppy jail, it broke the Internet's cold, cold heart.

The Atlanta-based Angels Among Us Pet Rescue posted a photo of shelter dogs Kala and Keira on Monday, in a last-ditch, desperate effort to get the pups adopted before they were euthanized.

In the pic, which quickly went viral, Kala is standing on her hind legs, gently wrapping her arms around Keira’s neck. 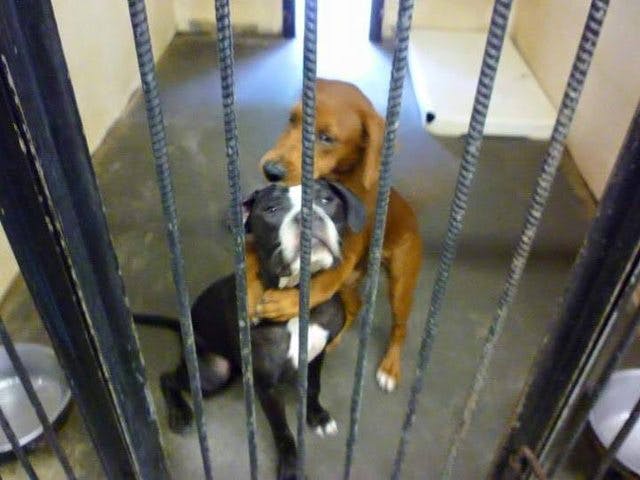 Angels Among Us Pet Rescue/Facebook

The rescue posted the picture to Facebook, explaining that the dogs were scheduled to be killed the next day if no one adopted them. The caption, written from the dogs’ perspective, was downright heart-wrenching.

We’re so scared in here. The people working in the shelters see how scared we are but just told each other that today is our deadline. We have to have someone rescue us or we’ll be “next.” Keira is black and not a “real boxer,” just a mix. She’s so brave and tells me it will be okay no matter what happens. She tells me to be brave too but I don’t know if I can be. Can you see our faces. Keira knows what will happen. You can see it in her eyes. She’s putting on a brave face for sure but I can feel her heart beating fast while I’m clinging to her. If no one saves us, someone will take her away from me. I’ll see her as she goes down the hallway. She won’t come back and I’ll cry. They’ll come for me next and I won’t be as brave. We’ve comforted each other while we were here. She gave me hope when I had none. Now it’s over. Unless…

The touching photo and terrifying story spread online like wildfire, and within two hours, a local person arrived at the shelter and adopted not one, but both of the dogs. That’s right, Kala and Keira are now together forever in a new loving home. 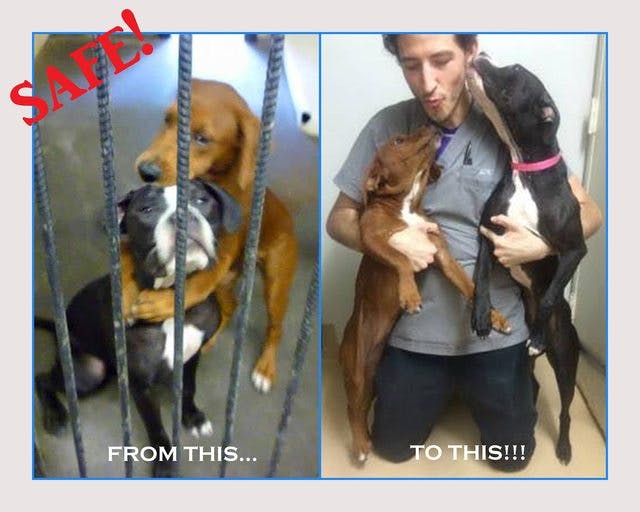 Angels Among Us Pet Rescue/Facebook

But while the Atlanta animal shelter and Angels Among Us worked together to save the lives of the hugging pair of pups, thousands of dogs are still facing euthanasia due to overcrowded facilities.

While some methods of euthanasia are considered more humane (usually, a tranquilizer followed by a lethal injection of sodium phenobarbital), six U.S. states are still killing homeless pets in the most disturbing way possible—the gas chamber.

In Michigan, a piece of legislation regarding the issue is pending: Grant’s Bill—named for a reportedly “friendly” shelter dog that was euthanized by gas chamber in 2008—would ban the use of gas chambers to kill animals. According to a Change.org petition directed at Michigan Gov. Rick Snyder, pets who are euthanized in a gas chamber experience excruciating torment. Whereas a lethal injection can put a pet to sleep in about five seconds, death by gas chamber can torture a dog or cat for 30 minutes before they finally die.

The petition has garnered more than 100,000 signatures in the three weeks since it launched. With a 150,000-signature goal, the finished petition will be delivered to Snyder’s office to provide support for Grant’s Bill.

The bill, also known as S.B. 403, was also introduced in 2013 but quickly stalled. The current version was reintroduced this June, and hopes to save animals from undue pain.