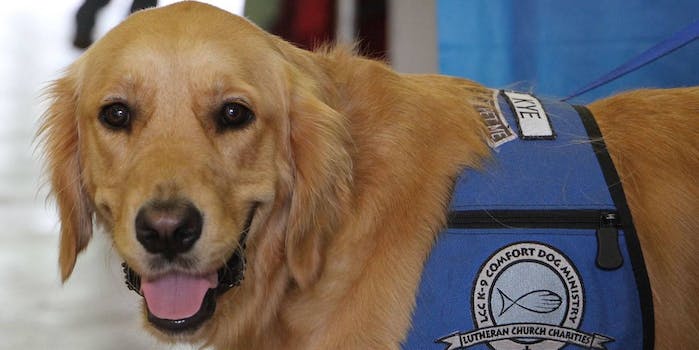 Man's best friend to the rescue.

Man’s best friend to the rescue.

Lutheran Church Charities’ comfort dogs have been flown in to bring warmth and a bit of peace to the city of Orlando, Florida, during the state of distress following Sunday morning’s Pulse nightclub shooting.

On Monday the dogs visited a vigil held in Orlando with over 5,000 people in attendance in memory of the 49 victims from the shooting. The dogs also had a chance to meet with first responders to the scene, helping them cope with the tragedy.

Twelve golden retrievers have touched thousands of lives working with local organizations including the Center, an Orlando LGBT community center. Most heart-warming of all are the Facebook pages dedicated to each dog, providing updates and pictures.

The Northbrook, Illinois, canines take pride in their work, posting whenever they can to let the public know they are here for anyone who is in pain.

The dogs were invited in response to the shooting by Rev. Gregory S. Walton, president of the Florida-Georgia district of the Lutheran Church-Missouri Synod, to work through the Trinity Lutheran Church in downtown Orlando. Trinity has opened its doors to help people find relief, letting the comfort dogs work their adorable magic.

The K-9 Comfort Dogs will be making a special visit to the hospital on Thursday to bring solace to the recovering victims. The dogs will provide endless hugs, kisses, and patience to let the victims know they are not alone.

“Your blood pressure goes down when you pet a dog,” Hetzner said. “When that happens, people start sharing what’s going on in their mind and what they are going through, and an important part of the healing process is to be able to talk about it.”