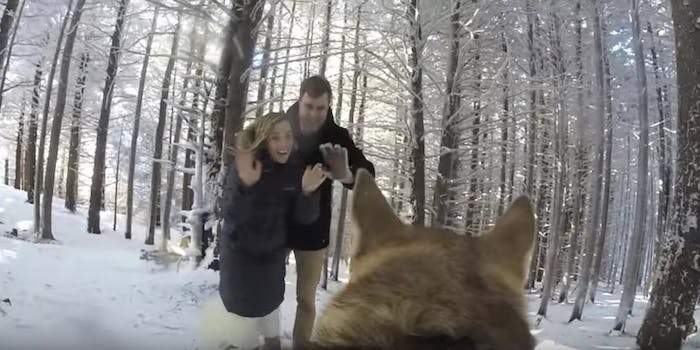 This couple’s wedding video was filmed by their dog

Who needs a videographer when you have a dog?

Dogs are good for many things, like snuggling, playing and making you smile, but they don’t have much to offer in the way of technical skills. One trusty pup, however, proved her worth as an artist by filming her owners’ entire wedding via GoPro.

Ryder the Siberian Husky belongs to Josh and Addie Burnette. The couple eloped last November on top of Roan Mountain in Tennessee. “The cool thing about it is that we eloped to the same mountain where we had our first date 10 years before, and it just so happened to snow two feet that day,” Addie told Refinery29.

In the video, we see Ryder frolicking in the snow, and most importantly, capturing all aspects of the couple’s special day.

Despite the fact that the wedding was last year, Josh just posted Ryder’s footage this month, commenting on YouTube, “Our dog, Ryder, insisted on filming the wedding video, so we let her do her thing. She took awhile to edit the footage, but we think she did a great job.”

While Ryder’s footage is impressive, she’s not the first dog to lend her camerawork for a wedding. A pup named Tuck captured his parents’ Montauk, New York, wedding last year (for Martha Stewart Weddings, no less) and a dog named Benny filmed his parents’ Washington state wedding back in August.

Dogs: They’re cuter and potentially more talented than we are.