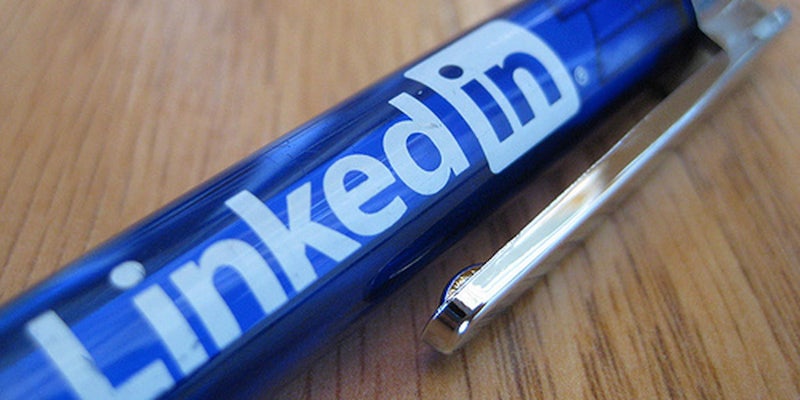 Dudes, stop using LinkedIn to hit on me

LinkedIn has but three purposes: finding out how old your coworkers are, seeing which of your college friends are still unemployed, and lastly, that horrible thing called “networking.”

It is not, and never will be, never should be, for e-romance.

I work in an industry where networking is mandatory. After events people often want to connect on LinkedIn, or sometimes just out of the blue based on common career interests. And as a disclaimer, my LinkedIn photo is not sexy—it’s a headshot, which puts my best professional face forward.

“Hey Elana. Thought I’d try to find you on LinkedIn to connect. Sorry I didn’t get a chance to chat longer. Had to rush out to get to another meeting. Would love to grab a coffee or drinks sometime if you’d be up for it.”

Thus began the annoying game of: Is this romantic or professional?

Despite my frustration at his vague and intentions-devoid message, I emailed him. He lives in another city, but said he would be in town the next week speaking at a conference and asked if I wanted to get a drink on a Thursday at 10:30pm.

10:30 at dark time. Now the intentions were becoming clearer: That is far too late for a first anything. I declined and said I had a few questions about “Pinterest strategy” for you know, my job.

We never solidified plans, but when Thursday came, he texted me around 7pm and asked if I was available. I hadn’t yet left work, didn’t have other plans, and it was an appropriate hour, so I agreed.

We met in the Penn Station vicinity, since he had a train to catch later. This also served the purpose of diminishing any threat of a booty call. Within minutes of our “date,” “meeting,” “whatever,” I called him out on his approach, trying to tease out an admission that the initial LinkedIn message was of a romantic nature. He had to fess up!

But he came back at me, showing how I’d done just the opposite with my “Pinterest” comment; I, too, was guilty of using LinkedIn to try and pigeonhole and define whatever this conversation we were having was.

Except, of course, that I was trying to define it within the parameters of the platform it was sent via… which is a professional one.

Despite all of my confusion and aggravation, I have to admit the “date” (or whatever) was lovely. We still keep in touch and I have no complaints really… except for the initial agony he caused me. Really, he should have just used a different medium.

Unfortunately, he is not the only one, and something of a trend seems to have begun. Just last week a researcher from Facebook messaged me, subject line: Hello :), the body of the message was blank. 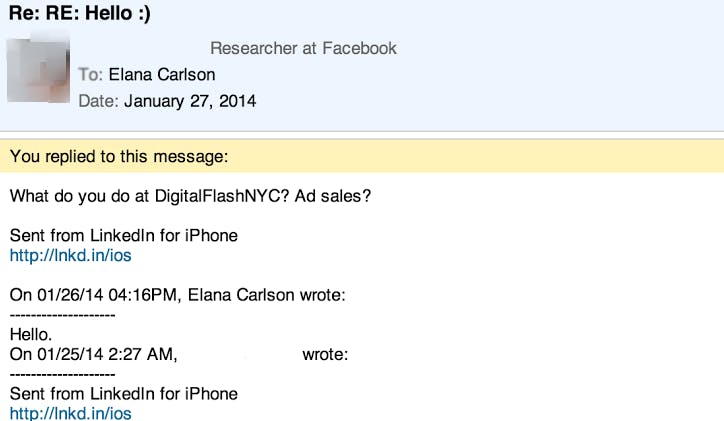 No, I don’t work in Ad Sales—look at my profile which lists what I do or click on my website and look at my résumé.

Dudes of the Internet, I implore you: Email me, Tinder me (duh), tweet me and ask for my phone number, or engage in a little light, RT-filled flirting. (Side story: I tried to pick up a dude on Twitter; partially for writing advice, partially because I liked his style. After agreeing to meet me for coffee, we moved on to texting. He quickly slipped in the fact that he had a girlfriend, we still met for coffee and now are writing buds.)

Send me a Facebook message even. Find me on Snapchat, I don’t care. Just please, let’s save ourselves the back and forth and confusion and avoid LinkedIn. There is a time and place, and it is not the social platform for professional networking.