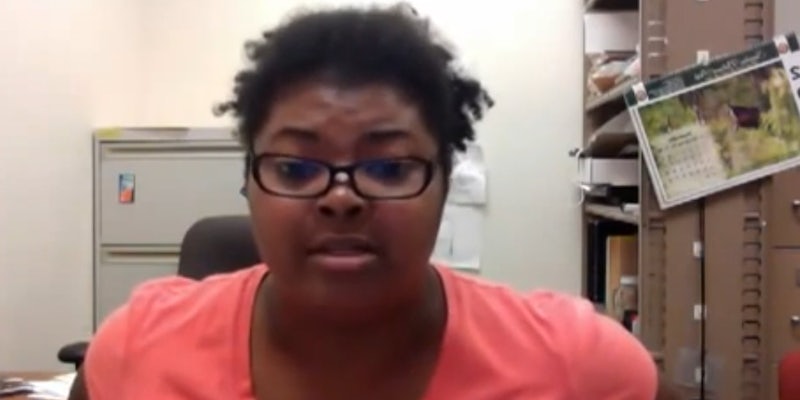 Dr. Danielle N. Lee politely declined an offer to write for Biology Online for free. Then things got ugly.

Biologist and science blogger Dr. Danielle N. Lee has been writing on the Scientific American blog network for over two years under the name DNLee, focusing on “urban ecology, evolutionary biology & diversity in the sciences.” Recently, she was approached by Biology Online to write a series of monthly articles under her blog name as the Urban Scientist. One of her first questions was, obviously, how much would she be paid?

When Biology Online explained that their guest bloggers were expected to write for free (or “for exposure”), Lee politely declined:

“Thank you very much for your reply.
But I will have to decline your offer.
Have a great day.”

But rather than accepting this response at face value, Biology Online reportedly replied, “Are you an urban scientist or an urban whore?”

When Lee posted screencaps of the exchange to her blog on the Scientific American site, other science writers were quick to show support on the Twitter hashtag #standingwithDNLee. Scientific American wasn’t as understanding. The site deleted her post.

Re blog inquiry: @sciam is a publication for discovering science. The post was not appropriate for this area & was therefore removed.

Lee’s original post was copied onto other blogs before it was taken down. You can read her response below:

“It wasn’t just that he called me a whore – he juxtaposed it against my professional being: Are you urban scientist or an urban whore? Completely dismissing me as a scientist, a science communicator (whom he sought for my particular expertise), and someone who could offer something meaningful to his brand.What? Now, I’m so immoral and wrong to inquire about compensation?”

Along with tackling the obvious lack of respect displayed by Biology Online, Lee’s blog post touches on a familiar topic for writers and artists who straddle the divide between casual and professional. She wrote: “[T]his rationalization of working for free and you’ll get exposure is wrong-headed. This is work. I am a professional. Professionals get paid. End of story. Even if I decide to do it pro bono… it is still worth something. I’m simply choosing to waive that fee.”

Scientific American (@sciam) is currently receiving a barrage of messages from readers who are shocked by the site’s treatment of Lee. As science blogger Dr. Kate Clancy points out, it didn’t make any sense for Lee’s post to be deleted for not focusing on the topic of “discovering science.” Clancy lists several of her own Scientific American blog entries that don’t remotely fall into that category (including personal posts about roller derby and sexual harassment), adding that Scientific American’s actions indicate a troubling attitude towards diversity in the sciences.

“I almost never write about discovering science, and in fact write frequently about oppression and privilege. But when a black woman writes about an oppressive experience, it is grounds for removal. Folks, this is Ally Work 101: it doesn’t matter your intent, what matters is the impact. Silencing a black woman who just got called an “urban whore” is sexist, racist, silencing behavior. It is wrong, and it is shameful.”

In a statement to BuzzFeed, Scientific American’s Editor-in-Chief Marietta DiChristina defended the site’s decision, saying, “Dr. Lee’s post went beyond and verged into the personal, and that’s why it was taken down.” DiChristina also clarified that while Biology Online is part of Scientific American’s advertising network, the two do not have an “editorial relationship”.