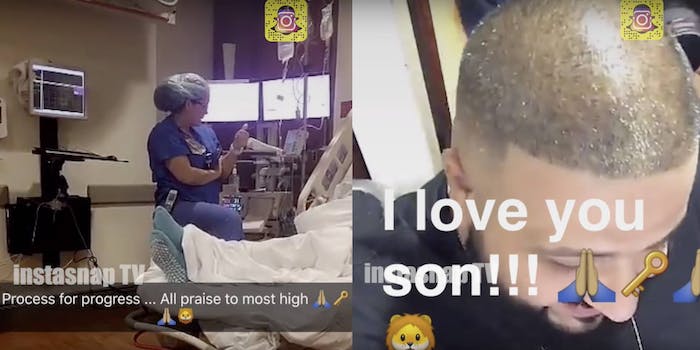 Screengrab via Recommended for you/YouTube

DJ Khaled's first son was born on Saturday and you can see how it went down thanks to his Snapchat.

When it’s a plain matter of the public record that all someone does is win, you certainly don’t expect them to downplay the birth of their first child. Just look at what DJ Khaled got up to on Saturday. The Major Key star was at a hospital, anxiously awaiting his wife Nicole Tuck’s delivery of their first child, and he decided to do it big.

Khaled Snapchatted the whole thing, from the water-breaking to the delivery. He even pumped in some music, including a few of his own tracks to help strike a celebratory mood, as well as the Islamic call to worship, as Khaled is a practicing Muslim.

The rapid-fire nature of the snaps makes for a strange, funny, and sometimes striking scene. They’ve been cobbled together into a YouTube video so that you can watch them back-to-back-to-back, reliving one of the biggest days of the exuberant rapper’s life. Be forewarned, the footage can get a little graphic. It is, after all, video of a birth in progress.

No matter the setting, DJ Khaled knows how to have a good time. It’s clear from watching the snaps that this wasn’t some kind of calculated, cool-heeled publicity stunt that elbowed out his genuine emotion or feeling, either. He seemed downright overjoyed and awed by the whole thing, never more so than when the words “I LOVE YOU SON” appear, along with the baby’s wails in the background. Keys to success might be an understatement on this one.

Luckily for the little guy, it sounds like he won’t have too much to cry about once he’s settled in. Back in May, Khaled told People that he plans to spoil his children:

I want to spoil our kids and give them everything. There’s no limit to the spoiling that I’m going to do. I’m going to spoil them to the minute they in my hands. I’m going all out.

If anyone had the right to be a little irked by the proceedings, it’s Tuck, who had the considerable task of pushing the little guy out into the world, at points with her husband’s tracks pumping in the background. It’s entirely possibly she enjoyed the atmosphere as much as he did, though. Everyone gets down in different ways, even when it’s birthing time.