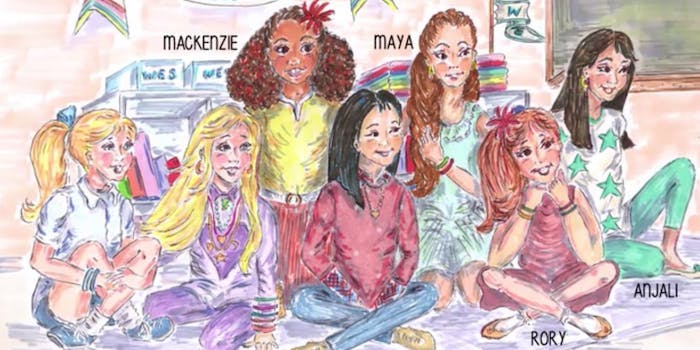 The Kickstarter-funded dolls who want to be senators, engineers, and CEOs

Twenty-two years after Lisa Simpson called for an alternative to vacuous dolls, Neha Chauhan Woodward is creating intelligent and ambitious dolls for a new generation of girls to play with.

She has designed seven characters with interests far beyond hairstyles and boys, and is holding a Kickstarter to get them produced. Known as the Willowbrook Girls, the dolls are a group of fifth-grade friends whose backgrounds and interests are as diverse as their ambitions; they play football, dance, and write code, and aspire to be senators, engineers, and journalists. Creating diverse and intelligent characters was particularly important to Chauhan Woodward, who is Indian-American, and is a Harvard graduate with an MBA from Stanford.

In an email to the Daily Dot, Chauhan Woodward wrote:

When I was growing up, I was always disappointed that the focus of my dolls was so much on appearance instead of ambition, and I was surprised to see that still be the case so many years later. I started talking to parents, who connected me to even more parents, and realized there was a real opportunity and need to build a better doll for girls–ones that were empowering and inspiring.

Chauhan Woodward said inspiration for the characters was drawn from “the smart, funny, outspoken, ambitious girls I knew growing up”—and ambitious these dolls certainly are. Maya wants to be an engineer, Rory a scientist, MacKenzie a senator. Anjali dreams of being an actress; Perry wants to be a journalist; Bailey wants to lead education reform; and the first doll to be made in full, Cara, is half-Latina and wants to be a CEO. Chauhan Woodward has teamed up with writer Molly Donovan, who is writing storybooks to accompany each character and help bring their personalities to life.

Chauhan Woodward started growing a social media audience for Willowbrook Girls with an Instagram account, which now has just under 25,000 followers. The interest has clearly translated into financial backers, as $23,000 of the $30,000 fundraising goal has been achieved on Kickstarter, with 13 days left to hit the target. There are a wealth of rewards for backers to opt for along with the dolls such as friendship bracelets, stickers, storybooks, and collector’s editions. Backers can also choose to donate a doll to Toys for Tots, a charity that provides toys and books to underprivileged children.