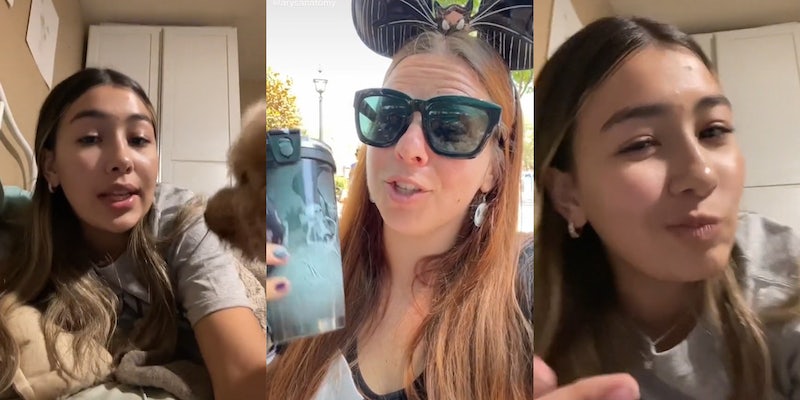 ‘Many Disney adults are like this!’: Starbucks worker stitches Disneyland creator, calls her out for being ‘rude’ at store

'Her whole platform is like Disney and being kind.'

A Disneyland Starbucks worker says that a popular Disney creator was “rude” to her in a now-viral TikTok, sparking discussion between the two TikTokers.

In a stitched video posted by TikToker Ary (@arysanatomy) on Sept. 3, she claims that popular Disney creator Kel (@themeparkmom) berated her while she waited for a mobile order at the Downtown Disney Starbucks.

“Our cafe was backed up because we just had a limited staff of people there, and she came up to the hand-off station and says she had a mobile order,” Ary says in the clip. “I told her, ‘OK, it will be a couple of minutes. So sorry, we’re like really busy right now,’ and she was being so rude.”

Ary claims that Kel asked her, “Is someone even working on it?” in “a rude tone.”

“It honestly just kind of pissed me off because her whole platform is like Disney and being kind and all that, but you know,” Ary says at the end of the clip.

Ary also commented on Kel’s original video where the creator talked about some merchandise she found at Disneyland, writing, “met her at downtown disney at starbucks and she was being super mean to me.” In response, Kel wrote, “I’m really sorry I was rude to you, definitely not my intention and I just wanted to make sure my drink mobile order had come in.”

According to a comment on Ary’s stitched video, she says that Kel “blocked” her—a statement that Kel, who has over 80,000 followers, originally denied when called out by commenters.

The video reached over 373,000 views as of Sept. 6, with fellow Disney workers supporting Ary in the comments and dubbing Kel a “Disneyland Karen.”

“Sorry girly. I will always 1000% believe my fellow cast members before a guest. Don’t let Karen’s get to you, you’re doing amazing,” one commenter wrote.

Others blasted “Disney influencers” for acting “entitled” when visiting the parks.

“[Cast member] here. Most of the time the rudest guests are the influencers. Like why do they feel so entitled?” a user said.

“Disney influencers SCREAM mean girl energy to me,” another wrote.

“As a former cast member I really hate the way these ‘influencers’ act. I’m so sorry you went through this. Just remember you are the magic. Not them!!” a third added.

Ary agreed in a comment reply, saying, “Oh girl if you knew there is so many influencers who are beyond rude!”

Kel issued an apology to Ary in a response video on Sept. 5 and admitted that she originally blocked her following her stitched video and comment.

“I’m sorry that I was rude to a cast member in Downtown Disney. That’s not what I meant to do, and I honestly thought I was just asking a question about my order,” Kel says in the clip. “I really love Disney and the cast members there, and this makes me all very sad.”

The caption reads, “Sorry that I was rude to you. Cast members make the magic and I’m sorry if I made your day any harder than it needed to be.”

The Daily Dot reached out to Ary via TikTok comment and to Kel via email.