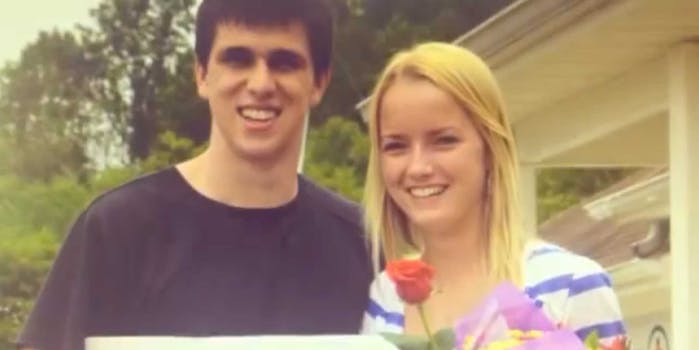 This heartwarming “Enchanted” promposal is the best promposal

Attention high school seniors: The bar has been raised.

How does she know you want to take her to prom? An over-the-top proposal will do the trick.

Annandale High School senior Paige Britton went to a local park with her friend Justice Garrish over Memorial Day weekend. She thought that she would be having a picnic with Garrish’s family until he suddenly ran off. She appeared confused until a friend comes up with a boombox, signaling her to follow.

Soon, the music started to play, and 50 of Garrish’s family and friends made Britton feel like a Disney princess by reenacting and lip-syncing “That’s How You Know” from Enchanted, one of Britton’s favorite Disney movies.

She suddenly found herself in the middle of a promposal—the latest craze where high schoolers try to one-up each other in asking their friends, crushes, and significant others to prom and post the results to YouTube.

Garrish’s family and friends hit the finer points of the scene from Enchanted, including Giselle’s “You are adorable” sign, the older couples exchanging flowers, the bands, and the wedding couples dancing around.

Britton had heard that Garrish wanted to ask her to senior prom, but she wasn’t expecting anything like the dance, which took Garrish three weeks to choreograph.

“I’m kind of shy,” Britton told Annandale Patch. “But it was really special that he did that for me. It seemed so unreal.”

At the bottom of the hill, Garrish was waiting for Britton with a bouquet of flowers and a poster that simply said, “PROM?”

Prom season may be winding down, but now high school students have an even higher bar to get past when it comes to next year’s proposals.