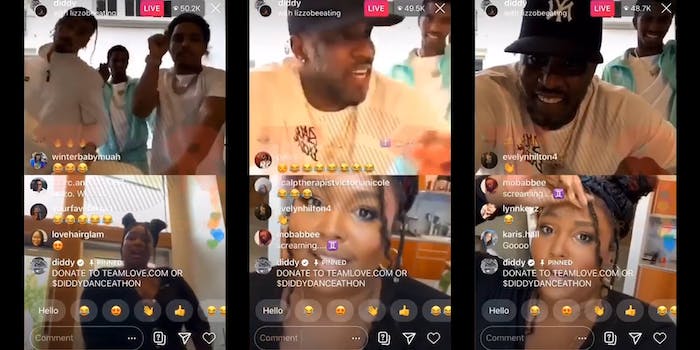 Diddy accused of fatphobia for response to Lizzo twerking

He offered an explanation.

Diddy on Sunday went on Instagram Live to raise money for Direct Relief, a nonprofit that rushes supplies to impoverished parts of the world, with the “world’s biggest dance-a-thon.” The event included the likes of Cardi B, Drake, Megan Thee Stallion, Michelle Obama, Naomi Campbell, and Justin Bieber.

All fun and games, right?

Lizzo was evidently embarrassed, saying, “sorry, sorry, sorry! Let’s do something fun” before putting on her hit song “Juice.” However, Diddy had media personality Draya Michele on and held no objection to her twerking it out.

Diddy was swiftly accused of fatphobia, with one Twitter user saying: “When lizzo was twerking it’s not ‘family friendly’ but when a skinny girl does it, it’s all fun & games????”

The controversy remained a top Twitter trend on Monday.

Diddy caught wind of the backlash and went back live to explain himself.

“There’s one thing that I want to make clear: My queen, my sister Lizzo, when I stopped the music it was ’cause it had a lot of curses in there, not ’cause she was twerking,” he stated. “She’s one of the best twerkers in the world. Let’s keep that clear. It wasn’t about twerking. You’re allowed to twerk on Easter. There was a lot of cursing in the record. And I don’t need child services knocking on my door right now, you understand? So that’s why I stopped the record. Lizzo, we love you and everybody stop looking for the negative, look for the positive!”

The fundraiser, though, has been a rousing success, pulling in over $3 million in the first few hours. The total has subsequently gone above $4 million.