A wealth of phallic photo-related information.

Coffee Meets Bagel bills itself as the anti-Tinder, a more calm, polite, regimented alternative to the swipe-happy anarchy of millennials’ favorite hookup app. You get one suggested date a day, rather than up to 900 matches an hour. It’s relatively peaceful! So imagine my surprise when I got an email from the service telling dudes how to make me beg them for their dick pics. 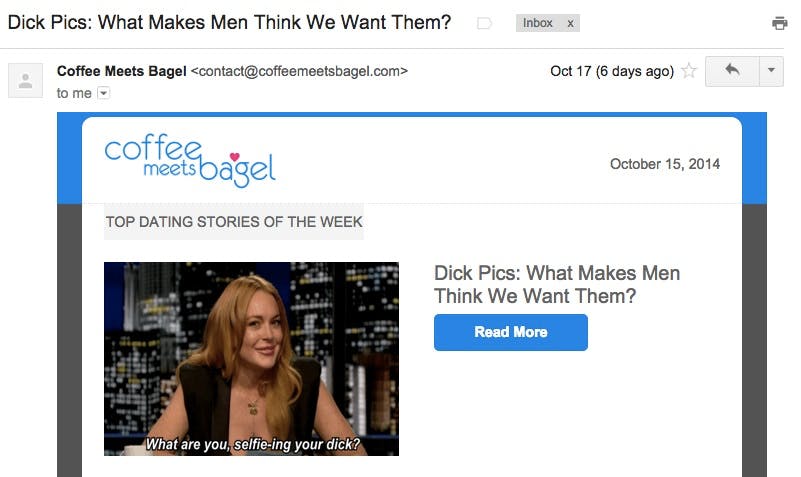 Male users got an email with the subject “Dick Pics: How I Get Women To Ask Me For Them” while female users got one asking “Dick Pics: What Makes Men Think We Want Them?” Despite the varying subject lines, the body was the same: It included links to a few CMB posts, the first of them written by a veritable dick pic-sending expert.

At the top of the post, the author makes one of the most interesting dick pic comparisons you’re likely to ever see:

There is a wide spectrum of phallic photography, and believe it or not they can actually be classy, appreciated, and cause a woman to be aroused. That’s because dick pics are as eclectic as sushi. There’s gasoline store sushi and there’s Omakase-style sushi. (Hint: Definitely take women on dates involving the latter.) You wouldn’t call sushi a “filthy” food just because most sushi is sold at the grocery or gasoline store, would you? Well, dick pics are similar, and they only get a bad rap because of the grocery-store kind.

I had to find out who this guy was IRL. He wrote the story anonymously, but, incredibly, the man goes by Dick in real life, too. (At least that’s what he told me and what I’m inclined to believe. I really want to believe.) He’s a successful, New York–based entrepreneur in his late 20s, and a member of Coffee Meets Bagel.

“I’d like to think that I’m a rare breed of guy who is openly promiscuous, yet still respectful of women (I never slut-shame and I am very anti-misogynist/MRA culture),” Dick told the Daily Dot via email. “The founders [of Coffee Meets Bagel who follow his social media presence] were interested in hearing about the topic of why men send dick pics, so I was probably the natural person to ask.”

He’s not at all ashamed of his views on dick pics, but his anonymity comes down to an SEO issue. “I’m more passionate about gender roles in dating and the different ways that men and women view sexuality,” he said. “Honestly, I debated putting my name out there because I’m pretty shameless. I’m also an avowed life-long entrepreneur who doesn’t really care about future employers. But I couldn’t bring myself to know that if the post was popular, it would be the first thing that comes up when people Google my name.”

Dick says he’s an experienced but not gratuitous dick-pic sender. “Don’t do this on women who are super sexually conservative, and don’t use dick pics as a form of eye molestation,” he instructed. “The other party has to be respected at all times for the dick pic to be successful.”

And it can serve as a strategic tool, if used properly. “The real power of the dick pic is that once you send an appreciated one, things start to really escalate from there because it’s on like Donkey Kong.”

Though he boasts a nearly 100 percent success rate with his phallic photos, a few girls made him sweat it out. “Once I thought it would backfire because the conversation was escalating and the other person seemed kind of kinky, like she’d enjoy the surprise. I got an ‘EW’ afterwards, however.”

But don’t hold a benefit for him just yet. “I ended up sleeping with the chick later.”