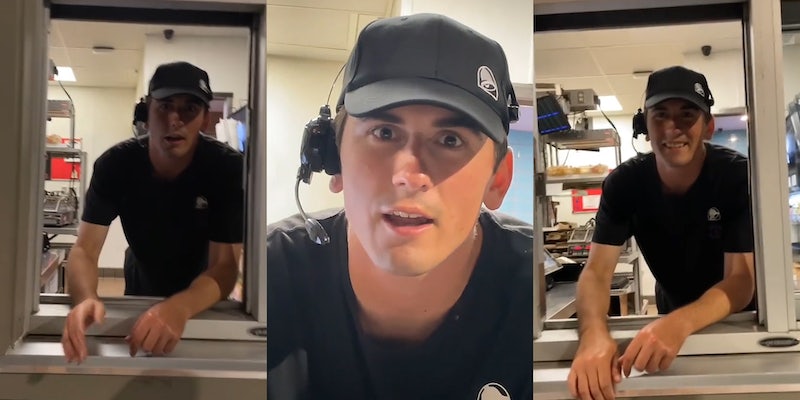 ‘I just feel like I’m better than everyone else’: Taco Bell drive-thru worker says he ‘doesn’t give a sh*t’ about orders, vents to customer about struggles

A viral TikTok shows a seemingly depressed Taco Bell drive-thru worker opening up to a customer waiting for their order, and viewers are loving it.

The video was shared by a TikToker named Carrie Fisher (@ceseibsfish) and shows the Taco Bell worker, named Paul, hanging out the drive-thru window to vent to her. As of Wednesday, the video garnered 882,000 views. It appears to be possibly staged.

“I just feel like I’m better than everyone else and that I just don’t give a shit about anyone’s orders here and I don’t like working here,” Paul says calmly. The TikToker laughs in response.

The worker smiles before growing serious again, adding, “I don’t even listen to people when they’re talking to me. And half the time I’m just thinking about poems and stuff in my head that I come up with, and I think they’re the best things ever. But nobody else wants to hear ’em.”

Paul ends his rant by introducing himself as Paul and proclaiming, “I hate Taco Bell.”

Viewers said Paul’s words resonated with them, and some said they liked the worker.

“I feel you Paul,” one viewer commented.

A third said, “Something about this is refreshing lol.”

Multiple viewers said Paul seemed on the brink of a “manic episode.” Others cracked jokes about the worker’s comments.

“Paul should be working at Olive Garden with all that word spaghetti he be spittin,” one user said.

“Virgo and Scorpio placements in this one,” another wrote.

One user commented, “And they say narcissists arnt endearing.”

Someone else said, “Paul doesn’t blink and that scares me.”

The Daily Dot reached out to the creator via TikTok comment and to Taco Bell via email.