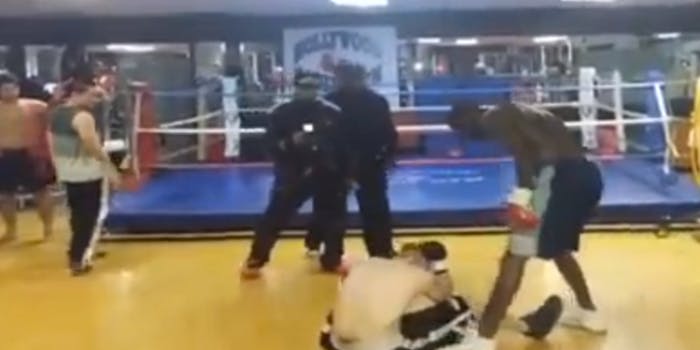 Here's what happens when trolls step out from behind their virtual armor.

What might our world look like if we could challenge Internet trolls to a real-life boxing match?

Last week, heavyweight champion Deontay Wilder treated Charlie Zelenoff to a taste of his glove. Zelenoff, a Los Angeles fighter who claims 28 knockouts and has a YouTube channel devoted to trolling other fighters and boasting about his talents, has allegedly been harassing Wilder online and via text for the past three years, dropping racial slurs, claiming he was going to murder Wilder, and even going so far as to threaten Wilder’s daughter. Then he challenged Wilder to a fight.

On May 7, the two men met up at the Hollywood Boxing Gym. Wilder claimed he was doing so to teach Zelenoff a lesson. Zelenoff claimed he’s not a racist—a lot of his friends are black—he just thinks Wilder is a “phony.” In the video, Wilder, who was accidentally wearing two right-hand gloves, connects several times with Zelenoff’s face, then chases him around the gym, like a sad cartoon character. Zelenoff also spends a lot of time cowering on the ground. He definitely learned a lesson and will never troll again, right?

Last year, British fighter Curtis Woodhouse tracked down a Twitter troll after his followers helped him find out where he lived. A buddy cop show featuring the two men has already been suggested.