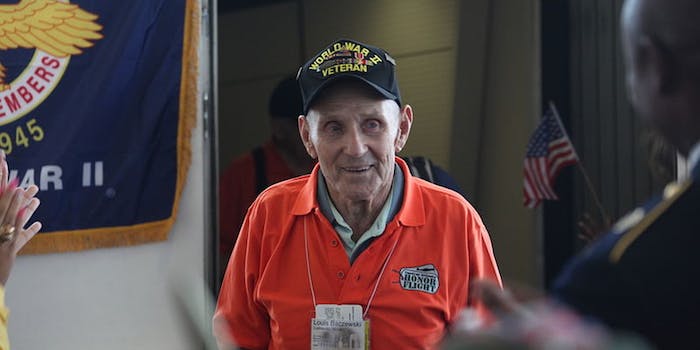 The most courtesy we usually afford elderly travelers is a pass on taking off their shoes at security.

As airlines find new ways to cut corners and charge passengers more, airports continue to devolve into a hellscape where common courtesy is abandoned and chaos reigns supreme. These days, the most we afford our elderly travelers is a pass on taking off their shoes at security and an early boarding pass so they don’t get trampled by herds of fliers trying to find baggage space in the overhead bins. Sometimes though, in the dark chaos of air travel, a few rays of humanity shine through the cracks.

Enter Anna Mari Barile, a Delta Airlines employee, who took the initiative to change the day of a few World War II veterans on Monday. As the veterans were boarding a flight to Paris from the Detroit Metropolitan Airport for the 70th anniversary of D-Day on Saturday, Barile performed a beautiful rendition of “The Star Spangled Banner.” A moment of silence fell over the gate, and everyone can be seen standing at attention during the patriotic and touching moment.