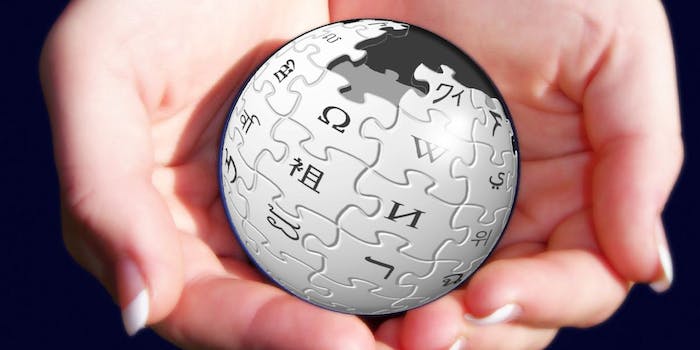 Wikipedia, which has an entry on fart jokes, still deems some topics unworthy of inclusion.

We tend to think of Wikipedia as constantly growing. The free, crowdsourced online encyclopedia has a legion of editors endlessly adding information to the site, ensuring that access to information about everything from the Defenestration of Prague to fart jokes is readily to almost anyone with an Internet connection.

However, Wikipedia doesn’t just move in one direction. At the same time the site is constantly expanding, it is also constantly contracting with hundreds of articles per day being removed by it’s volunteer editors.

Earlier this week, a Dutch web developer launched an effort to prevent those deleted articles from being lost forever. It’s called Deletionpedia and stops entries from disappearing down the memory hole by automatically scooping up any Wikipedia article that’s been flagged for possible later deletion. That way, if the article is ultimately removed from Wikipedia, the information contained therein will still be retained.

Deletionpedia creator Kasper Souren, a former frequent Wikipedia contributor who has since grown disillusioned with the site’s famously difficult editing culture, got the idea to start Deletionpedia while doing research for a cryptocurrency-centric wiki he ran called Coinwiki. He noticed a few of the smaller, non-Bitcoin currencies had Wikipedia articles that were flagged for deletion. Souren managed to copy some of the articles to his own wiki before they were removed, but there was one he was too slow to save.

?That’s when I realized there’s a need for a wiki that saved these articles,” he wrote in an email. ?I remembered there was one [called Deletionpedia], but found it had stopped working. That’s when I went ahead, hacked something together and then during the course of my coding plus wiki creation session I found out that Deletionpedia.org was free (again). So I registered it and put my project there.”

There are a bevy of different reasons why an article could be deleted from Wikipedia, an action that can only be taken by an official site administrator—a privilege granted to only a select number of dedicated volunteers. According to Wikipedia’s deletion policy, articles can be deleted if they contain blatant misinformation, lack reliable sourcing, aren’t on a topic that editors feel isn’t sufficiently ?notable,” or if they were created by a banned or blocked user (among other reasons).

As Souren noted, this is the second incarnation of Deletionpedia. The original, which served largely the same function, was updated for only a few months during 2008.

Both occurrences of Deletionpedia are public flare-ups of an internal fight that’s bubbled under Wikipedia’s surface for a decade. On one side are the ?inclusionists,” who feel that because Wikipedia doesn’t have to concern itself with space constraints there’s no reason to eliminate articles on particularly obscure topics. Deletionists,” on the other hand, insist that keeping standards high about what topics to cover is an essential element in ensuring Wikipedia’s ongoing relevance.

An anecdote in a 2007 article in the Telegraph about the schism yields a particularly telling example. Earlier that year, Wikipedia founder Jimmy Wales had posted a one-sentence article about a small business/nightclub that simply read, ?Mzoli’s Meats is a butcher shop and restaurant located in Guguletu township near Cape Town, South Africa.”

The article was what’s called a ?stub,” meaning a short entry meant to serve as a placeholder to be expanded upon later. Within minutes, Wales’s stub was unilaterally deleted by a 19-year old editor, only to be put back online after the identity of its original author was revealed. Weeks of debate followed—arguments that, as Souren’s new creation shows, have never been answered in a way that’s satisfactory to those on both sides.

?I had already become less active [on Wikipedia] around the time I started Hitchwiki.org, a wiki for couchsurfing, when I started to receive messages on my talk pages that articles that I worked on were marked for deletion,” Souren recalls. He argues that Wikipedia’s shrinking core of active editors has created an atmosphere of off-putting insularity.

?For example I had edited an article about Trio Mocoto, a Brazilian 70s samba rock band, and then suddenly someone comes in and deletes the article without notice. Boom. Gone. That’s just not the way to keep a happy healthy community.”

At this point, the project has only been running for about three days, but it has already grabbed nearly 600 Wikipedia articles that were flagged for deletion. Souren says that, by his rough estimation, about half of these articles are ultimately removed from the site.

For its part, Wikipedia admits that about 80 percent of all articles created by new users are quickly deleted, mostly for quality control issues.

Some of the articles Deletionpedia has grabbed include pieces on Kuwaiti rapper Big D, an Australian brothel called The Benchmark, and a collection of the critical reaction to every film and television iteration of Star Trek.

Although, the most interesting addition to Deletionpedia is for the Internet meme Doge. The deletion request came on December 20, only three days before the Daily Dot wrote an article declaring Doge, widely considered the least annoying meme of 2013, officially dead after a pair of Tea Party Republicans appropriated it for their own political purposes.

The eagle-eyed Wikipedia editor who flagged Doge may tend towards deletionism, but he or she was definitely ahead of the curve.