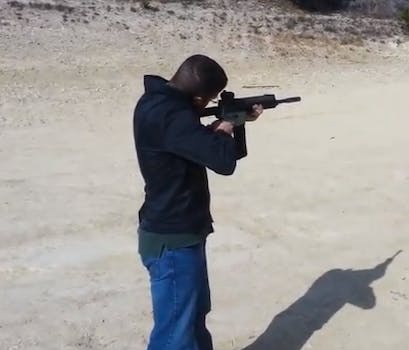 Defense Distributed has hit more than a few hurdles in its quest to print firearms.

The brainchild of libertarian-leaning collective Defense Distributed, the Wiki Weapon Project aims to develop the world’s first plastic gun that can be printed using a 3-D printer.

But the group has faced various challenges on their way to achieving that goal.

When they tried to raise $20,000 via Indiegogo in August to purchase a low-end 3-D printer and enough plastic polymer material, the crowdfunding site shut their campaign down. The company reasoned that Defense Distributed had violated its terms of service.

Defense Distributed eventually raised enough money to lease the equipment needed thanks supporters who donated funds directly to the group via their site. The collective then proceeded to lease a uPrint SE model from manufacturer Stratasys.

But that too became a problem. Once Stratasys found out why Defense Distributed wanted a machine, the manufacturer’s legal team immediately sent Cody Wilson— the group’s de facto leader and a law student at the University of Texas—a letter saying that they were reneging on their agreement.

“It is the policy of Stratasys not to knowingly allow its printers to be used for illegal purposes,” the letter read. “Therefore, please be advised that your lease of the Stratasys uPrint SE is cancelled at this time and Stratasys is making arrangements to pick up the printer.”

Stratasys followed through on their promise. They picked up the printer, dealing another blow to Defense Distributed and their plans. On top of that, the collective discovered that they might have a harder time, legally speaking, in achieving goal than they once thought.

Wilson paid a visit to the Austin branch of the Bureau of Alcohol, Tobacco, and Firearms to find out whether the Wiki Weapon Project was in the clear. The agents he spoke with told him that they weren’t entirely sure, that they were in a gray area and might require a Federal Firearms License—a license that would permit them to manufacture firearms—for them to be in the clear.

So they did. Since then, according to Wilson, who spoke with the Daily Dot via phone, seven weeks have passed and Defense Distributed has yet to hear back on its application.

But, once again, that hasn’t stopped the group from moving forward with the Wiki Weapon Project.

Over the weekend Wilson and his cohorts assembled and tested an AR-15 semiautomatic weapon built around a 3-D lower receiver. The collective used a popular design found on the Internet, and the receiver was manufactured using a printer provided by an Austin-based company. Given the controversy of the project, Wilson refused to divulge the company’s name.

The weapon fired six bullets before collapsing. The entire test was filmed and uploaded to YouTube.

“At this point, people were questioning our capacity and our abilities, so we decided to take one of the popular receiver files out there and do a visual review,” he said.

But the group knew that the assembled weapon would fall apart. The video (and the review) was the first part of an experiment Defense Distributed is conducting. The above clip is meant to demonstrate what current designs are capable of doing.
Defense Distributed plans to do a follow up with an AR-15 that utilizes a similar receiver that contains modifications made by the group.

“We’re going to be printing with a cheaper polymer on this next one with an improved file,” Wilson stated.  “I expect that it will last a whole lot longer, and it’s going to surprise people.”

Despite the progress, Wilson and his team members feel the media are actively rooting against them. He cited two reports on the video and the review—one published by the New York Daily News and the other by Forbes—as the latest misrepresentation of their project’s advancement.

“When Indiegogo canceled our campaign, [the media] said, ‘oh, it’s over.’ When they took our printer away, they once again said, ‘oh, well it’s over.’ It’s this constant desire to pronounce the end to the project, and of course there is no end to this.”

For Defense Distributed, the video is three steps forward after taking two steps back.