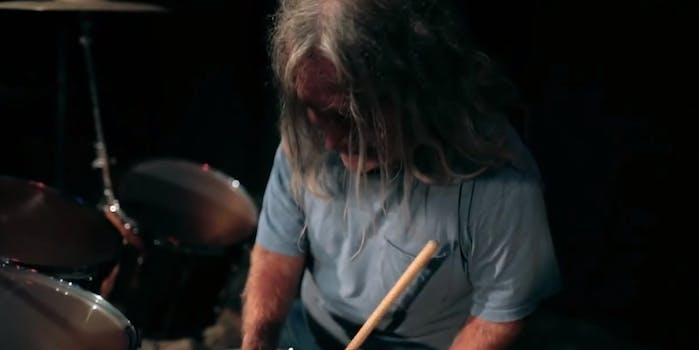 Dean Zimmer will drum you under the table any day of the week.

Dean Zimmer’s band has opened for some pretty big names: Foghat, Styx, Thin Lizzy, Eddie Money. If you were in the back of the crowd at any one of those shows, you surely wouldn’t have noticed anything special about Zimmer—except that he was one damn good drummer.

But Zimmer was born with arthrogryposis, a rare congenital birth defect that severely restricts the joint movement in his extremities. He’ll never be able to walk properly, condemned to spend his days in a wheelchair. And he can drum you under the table any day of the week.

A recent YouTube short about Zimmern by filmmakers Ross Harris and Stanley Gonzalez,

has taken him from rock cult legend to Internet superstar, thanks to a trip to Reddit’s front page.

Zimmer’s strong work ethic has earned him the praise of fellow musicians. Among them are Gregg Bissonette, touring drummer for Ringo Starr’s All Starr Band: “He’s really a musical drummer. a lot of people can play fast and show boat, but being musical, that’s something that [he’s] got a great ear for.”

Since it was first posted on Aug. 12, the six-minute musical video has been viewed more than 300,000 times and has spread on various social media platforms. On Reddit, Zimmer’s story has jumped to the front page of r/music, receiving more than 2,800 points and hundreds of comments praising him for his perseverance. Well, that, and his awesome powder blue van with the the teardrop windows.