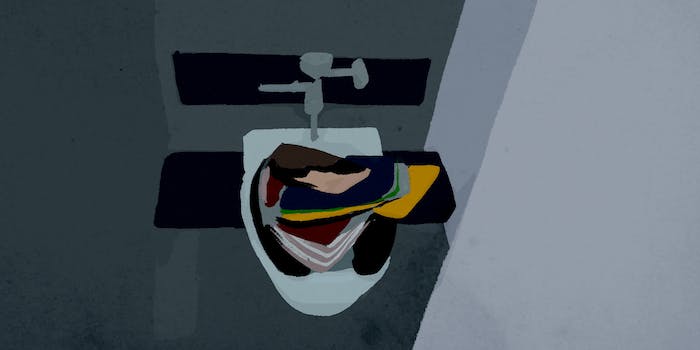 Alex Hernandez has received a lot of online support, but he no longer feels safe at school.

Alex Hernandez has been deaf since age 1. As a result, he has been bullied and picked on his whole life, he says—but it was a recent incident that left him afraid to go back to Burke High School in Omaha, Nebraska.

According to surveillance video, two male students took Hernandez’s backpack during lunch last Wednesday. His tablet, his school supplies, his debit card, and a battery for his cochlear implants were later found in a toilet in the boys’ bathroom. It didn’t take long for a photo of his belongings piled in the toilet to surface on social media and go viral.

This should never have happened! 😡😡😡https://t.co/kLTOPdvYn4

Many online were outraged on Hernandez’s behalf, and the high schooler says he’s received lots of messages of support and encouragement since going viral. His sister and fellow students at Burke also started a GoFundMe page to replace Hernandez’s supplies, and the campaign quickly reached its $800 goal.

In a statement, Omaha Public Schools acknowledged the incident:

We take these kind of situations very seriously. Due to student privacy laws, we are unable to provide specific details regarding the situation, but we do want to assure you that we are working with all parties involved. The situation was an isolated incident. OPS strives to provide a safe learning environment for all students.

Despite the support, Hernandez says he doesn’t feel safe enough to return to school. ABC 23 News reports that Hernandez’s mother plans on transferring her son to Ralston High School.

“I have friends who are hard of hearing that go there and they say it’s good,” Hernandez told ABC 23 of Ralston. “They get a lot of support and they don’t get bullied.”

Burke High School confirmed that one student had been suspended and another was under investigation for their role in the incident. Hernandez’s mother also plans on filing charges against the two boys, stating, “They need to be reminded that there are consequences to stealing and bullying.”