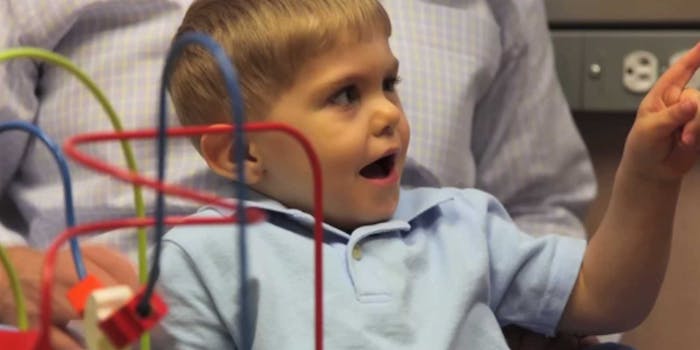 Watch a deaf 3-year-old hear for the first time

Grayson Champ is the first child in the U.S. to get an auditory brain implant.

Most of us might take hearing for granted, but one 3-year-old is a reminder that it’s still a miraculous thing.

Grayson Champ was born deaf. Until three weeks ago he wasn’t able to hear anything because he’s missing cochlear nerves, which help us process and hear sound.

His parents, Len and Nicole, wanted to help their child, so they tried a cochlear implant. While it has worked for many patients in the past, the procedure didn’t pan out for Grayson.

Then his parents found out about a children’s research trial at UNC Hospitals in Chapel Hill, N.C., that could possibly give him the ability to hear.

“We’re bringing the potential for hearing to a child who can’t hear and had no other options,” Craig Buchman, an ear, head, and neck surgeon at UNC, explained.

Grayson is the first child in the U.S. to receive an “auditory brain implant,” which places a microchip in the brain to help process the sound that travels through tubes in the ear.

Once Grayson received the device, his family gathered to activate it.

“Daddy loves you,” Len said, and Grayson’s reaction to hearing his father’s voice for the first time was priceless. Len later described the experience as “phenomenal.”

Grayson’s parents are now helping him process the different sounds traveling through the tubes in his ear.

“We don’t know exactly what it’s like for him,” Nicole told WBTV. “We don’t know what he hears. His brain is still trying to organize itself to use sound.”