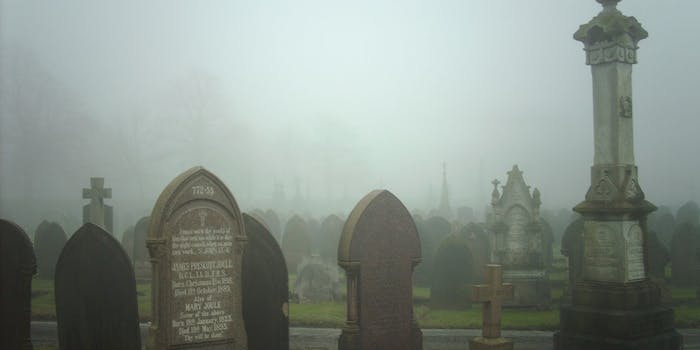 Everybody loves a good ghost story.

Everybody loves a good ghost story. When I was young, I used to force my grandmother to repeat the same tale to me about a long, hairy arm that followed you wherever you went. The arm wasn’t attached to a person. It just was, and I bought it because fear forces you to accept all kinds of impossible norms, like virgin heroines who run upstairs and get stabbed to death because they can’t figure out to go outside for help. This is what terror looked like when I was young.

Today, fear lives in the computer screen and on television, behind the eye of an all-seeing malevolence. From The Cabin in the Woods to the found-footage genre, what we fear is not fear itself. We fear technology, its ability to make the supernatural seem perfectly ordinary.

Until yesterday, I’d never had my own tale to tell—no ancestral forces in the attic, no twilight knocking at my chimney. But then a dead person started following me on Twitter.

I barely knew him in real life. We met at my first nonprofit job, and I was too busy trying to seem more adult and put-together than I was to get close to anyone. His office was across from my desk, meaning that I was directionally obligated to look at him all day. He had the name of a television detective, which gave him a sort of built-in mystery, cool yet somewhat inscrutable. We only shared a handful of conversations, usually about the Buddhism that he practiced and that I pretended to be more interested in than I was. 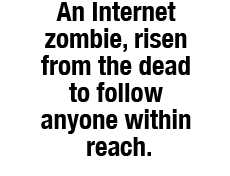 He had a presence that was comforting, like hanging out with an old friend you weren’t sure you ever made. If you spotted him in an old photo album, you’d point to him and smile without being able to say one relevant thing about him. I remember exactly one conversation that passed between us. He told me about his daughter, who had recently learned to walk; his wife had charged him with being the one to hold the camera, and he was so busy recording his daughter that he felt like he was missing her growing up. By constantly documenting the present, he wasn’t living in it.

I feel like I’ve told this story before, and at some point, its lesson became bigger than the person who gave it to me or the projection of him that’s now following me. His goal was to make a moment live for digital eternity—or as long as our current version of forever is compatible with the future. Do you ever wonder what happens to our Facebook photos 40 years from now, when we’ve all moved onto whatever version of social media replaces it? Facebook holds the memories of more than 1 billion people, responsible for preserving the history of an entire generation. If you look over your past timeline, you can see whatever version of yourself you’d chosen to be then and what Facebook photos you’d left tagged. You get to see what the ghost of yourself will look like 60 years from now. Who will people remember?

Last night, I broke a recent Twitter embargo to search his timeline for answers to that question. Is it possible to put together a life from social media or the tweet he sent to Kanye West? Or are we just editorializing?

His last tweet was sent on June 20, congratulating Ethan Hawke on his recent cinematic success. “Such [a] beautiful job on Before Midnight,” he wrote. “Thank you.” He took the time to give Kanye West a shoutout, and he thanked Obama for his commitment to our social safety net.

In his Internet life, he was committed to activist causes, a dream of being a force for good in the world instilled in him through years of nonprofit work. When he tweeted, he was constantly engaging with other users and retweeting statements he thought the world should hear. On Jan. 21, he retweeted a Cory Booker quote from Obama. “You and I as citizens have the power to set this country’s course,” Obama had said.

But what strikes me is how little he tweeted. It’s just a smattering of posts from the last six months of his life. Sometimes it’s enough to just exist, whether your existence is recorded for eternal posterity or not. You can’t digitally transcribe an entire life, but it’s the moments in between that matter most—like standing in the kitchen with a stranger as he tells you about the person he hoped to be.

And now that stranger is a spambot—an Internet zombie, infested with malware and risen from the dead to follow anyone within reach.

It would be enough to make your skin crawl if it weren’t so perfectly ordinary.