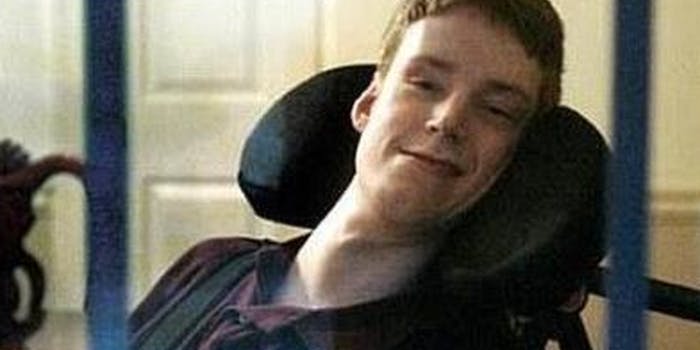 An anonymous man confessed to spending years crafting the persona of Rose, the 24-year-old blogger with cerebral palsy who died Monday.

Inspirational blogger David Rose died Monday, reportedly losing his brief battle with pneumonia, but reports are coming in today that suggest the 24-year-old paraplegic never even existed in the first place.

According to theCHIVE co-founder John Resig, who followed Rose on Facebook and Twitter and helped make him an Internet celebrity last week, David Rose was an elaborate hoax conceived by a man who had created and operated multiple online personalities for the cerebral palsy-affected individual since 2007.

Two items of evidence allowed Resig to conclude that “Rose” was not Rose.

The first came by way of an email sent to Chive model Sarah Hill, a friend who’d followed Rose’s tweets and read his blog and obtained a tremendous amount of inspiration from the supposedly heartrending kid.

The email, sent by a Chive reader, “wondered out loud how a person who can only type 4 words-per-minute could carry on such lively conversations” on Twitter and respond to people within seconds. (Rose, whose Twitter account has since been deleted, would sometimes tweet several dozen messages a day, though the individual claimed to use a Tobii, a word processing device that tracks movement within the eyes.)

That same email also alerted Resig and his friends to a 2010 profile on a Danville, Va., man named Hunter Dunn, someone who’d been born with cerebral palsy. Accompanying the story were photos Rose had been using on his Facebook and Twitter profiles—which further raised Resig’s suspicions.

Resig then checked archives.com, a real-time death record locator, and found that there was no David Rose on record.

A few hours later, he came upon a blog called Dave on Wheels Exposed. It holds a Canadian domain and only contains one post, an investigation into David Rose launched by someone named Kristi-Anne.

Kristi-Anne’s findings basically backed up the discoveries that Resig had made, but Dave on Wheels Exposed did contain one item of information Resig hadn’t yet seen: a note in the comments from an anonymous individual claiming to be Nichole Rose (the presumed name of Rose’s sister) admitting that the entire tale was a hoax.

“I figured it’d be better that people have a broken heart over his passing than over his truth, which would reveal years of wasted conversations and friendship,” the individual wrote. “Exchanges from the past could have remained as fond, albeit false memories.

“David was just a character, a part of my psyche, and fame would soon reveal what it has revealed today. So, the character passed. In hindsight it probably would have been better just to shut it all down and have everyone wonder what the hell happened, but the final post was meant to have the effect it did. To inspire people to love and live a better life, and the public knowledge that it came under the false pretense takes it all away. I hope that people who were moved by it still live by it, but it seems unlikely.

Then the anonymous letter-writer addressed Kristi-Anne directly: “It’s possible that more damage has been done in your reveal than in the original deception.”

Whether that’s true remains to be seen, but Resig may have captured the spirit of all those affected by the strange, enduring saga of the never-was David Rose.

“I believe in the inherent goodness in the human condition,” he wrote.

“I’ve posted hundreds of sick and injured people in the DAR (Daily Afternoon Randomness) who need support. It doesn’t occur for me to write back, ‘I need proof that you have cancer before I post this.’ But I overlooked that there are bad people out there, people who would go to such huge lengths to deceive the masses. All of us here… are deeply hurt, angered, and saddened by all this.”