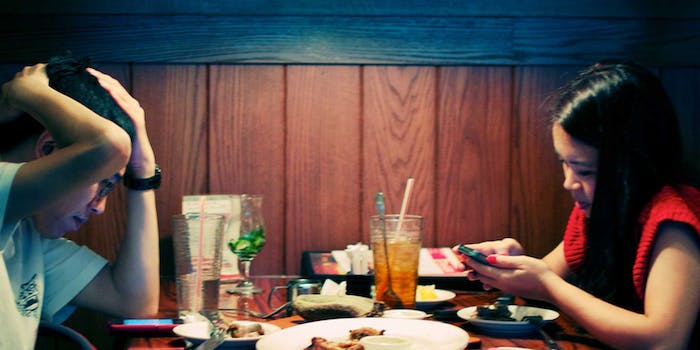 The hottest dating app of the moment also had one of the most upsetting security glitches.

Tinder is a relatively new mobile dating app for iPhone and Android that debuted late last year, and has found a niche market amongst college kids, professionals, and creatives with busy schedules. Its interface is attractive and photo-heavy, and allows users to browse pics of potential matches in their area, based on location data and Facebook activity.

If you’re matched with a photo you like, you swipe right. If you’re not interested, you swipe left and move on. When two people have “right-swiped” each other, they can chat one-on-one. It takes a lot of the work out of online dating, and allows users to interact on their phones, which they’re doing anyway.

Over the weekend, however, it seems the app revealed physical location and Facebook data. Tinder works on radius recommendations, so the user must provide their current physical location in order to find a close match. Tinder CEO Sean Rad addressed the breach, but said it was “patched up very quickly.” Tinder’s Android app was just released, and he said the “very, very, very brief” security flaw was a result of the app’s new code.

Is this @tinder security glitch related to Carlos Danger? #discuss

Tinder also didn’t tell its users about the issue, or relate how much data was released in that very, very, very brief time. Sensing an ensuing media shitstorm, the company released a statement yesterday:

“We take the privacy of our users very seriously and have taken the appropriate measures to ensure that our user data cannot be accessed from anyone inside or outside the company. We became privy to a minor security flaw related to one of our releases and patched it up within hours of that release.

Since Tinder’s inception, we’ve implemented multiple precautions to protect our user data, including encryption. This minor leak was first brought to our attention by one of our engineers and we resolved it very quickly, before it was able to cause any harm to our users.”