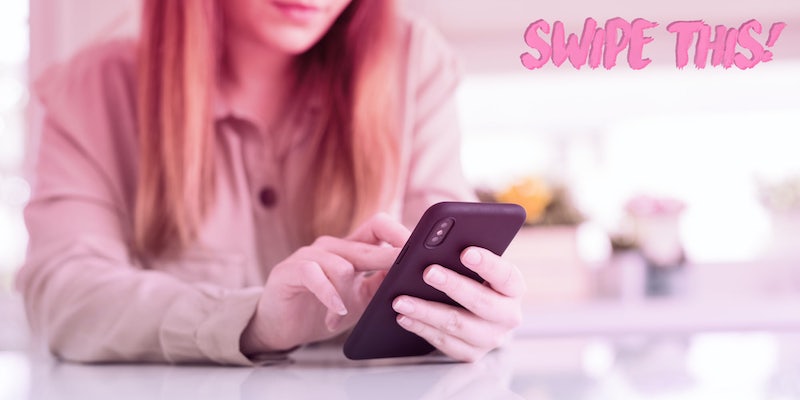 Swipe This! Is it wrong to lie about my age on a dating app?

You told a little white lie, and it blew up in your face.

Swipe This! is an advice column about how to navigate human relationships and connections in an age when we depend so heavily on technology. Have a question? Email [email protected].

I recently did something I never thought I’d do: I lied about my age on a dating app.

It wasn’t my intention to deceive anyone. But when I turned 40, I noticed that my dating options shifted. I was only matching with men who were much older or much younger than me. I wanted to meet someone closer to my age. So I shaved off three years and said I was 37.

Then I met someone lovely. He was 38—so actually only two years younger than me! It was fairly casual at first, but we were having great fun. A few months in, I realized we had the potential to be more serious. I suppose he did too because he introduced me to his kids and members of his extended family. This all happened quite quickly and without any planning. And when it did, I realized I needed to come clean.

It did not go well. He flipped out. He told me I had no integrity. He said he could never trust me after this. I was devastated. I tried to explain my point of view, but he wouldn’t hear me.

The whole thing made me feel pathetic. I didn’t even want to date. So I took a few months off the apps this summer and focused on my own interests. But now I’m feeling the urge to date again. I don’t want to be single forever. I want to find a partner.

So I’m wondering… Do I have to reset my age to 40? I don’t want to dig myself into another mess—but I don’t want to go back to sifting through 65-year-olds and 20-year-olds. I also feel like an idiot for screwing up a good thing. Maybe if I’d told the truth, I wouldn’t be alone in the first place.

Am I crazy to think it wasn’t so terrible to shave a few years off my age?

Ah, what a frustrating ending indeed. You told a little white lie, and it blew up in your face. I wonder why this information hit your former dating partner so hard. Sure, no one likes to be lied to, but his reaction seems outsized to me. It’s possible he has major trust issues and was already looking for a reason to stop trusting you.

It’s also possible that he lacks empathy in a major way. Why couldn’t he listen to your point of view? Is it really that hard to understand why a woman living in a world that tells her she has an expiration date might shave off a few vanity years when setting out to find a potential match?

He doesn’t have to agree with your choices, and he certainly doesn’t have to like the fact that you lied, but if he can’t have sympathy for your choices, I doubt he would make a very good partner when you’re facing life’s bigger challenges. As disappointing as this ending may have been, I hope you’ll trust me when I say you dodged a bullet!

But now you’re left with a bit of a moral quandary. You’re asking me if what you did was wrong. I’d argue that it’s in a bit of a gray area. It’s not a crime, but peppering little lies into your life is not a great way to start a relationship. If you were interested in dating casually, I’d honestly say, who cares? Say you’re 25 if you want!

But you’re not looking for casual. You’re looking for a life partner—someone who will know you, see you, and support you. Imagine you’ve found that person. Do you really want to set yourself up for another moment where you have to reveal that you’ve lied about a basic detail of who you are?

On the other hand, I do understand why you’re tempted to hold on to this tactic. You were roaming the dating app desert as so many of us have, and you found a secret doorway into a seemingly greener place. You had a hunch that something was holding you back, so you fiddled with the features you could control—and it worked! Why would you want to give up those greener pastures? Why would you want to go back into the desert?

I have some friends who believe dating is a numbers game. They think the only way to find The One is to put yourself out there again and again and again. At a purely rational level, I don’t think they’re wrong. You certainly have to be in it to win it. And the more people you meet, the more likely you are to meet people you like!

But personally, I hate this way of thinking because it veers into Grind Culture territory. I think, beneath the “it’s all about the numbers” truism, there’s a threat that if you ever dare to let yourself rest, you risk losing everything you’ve ever wanted! At its best, this is a setup to be really, really tired. At its worst, this kind of thinking encourages us to push ourselves so hard that we get hurt.

That said, I am so glad that you gave yourself permission to take a break. What a wise and kind thing to do for yourself. I’m curious what you discovered about who you are and what makes you happy in those months away from the apps.

I also wonder if you’re anything like my friends. Are you a high achiever? Do you worry that if you aren’t producing something, whether it’s a high income or a new relationship, you’ll somehow lose your value?

I hear the pain in your letter. I hear someone who is trying as hard as she can to do everything “right” and then blaming herself when circumstances beyond her control don’t pan out quite as she would have liked.

I hear someone who is forcing herself to pay twice for a mistake that she made once.

This is something nearly everyone does, by the way. We experience pain or suffering because something isn’t going our way. And then we beat ourselves up for feeling how we feel.

In Buddhism, this is called the “second arrow.” The idea is that none of us can avoid pain or disappointment. This is the first arrow. And having an arrow stuck in you is pretty painful. In fact, it’s probably best to spend some time and caretaking the arrow out and tending to the wound.

But what do most of us do? We launch a second arrow. We say, “Well it’s your fault the arrow hit you! You shouldn’t have been standing there you dummy!” Or we berate ourselves for feeling pain. “Get over it loser! It’s just an arrow!”

Whatever your version of the second arrow is, you don’t have to launch it. You can put the bow down and tend to the part of you that’s hurting instead.

It hurts to live in a world that says your value will decline as you age. And it hurts to see evidence of that every time you open an app looking for love.

But the truth is that you don’t need an army of suitors. You just need one. And I think you’re far more likely to find the Right One if you show up as your authentic self.