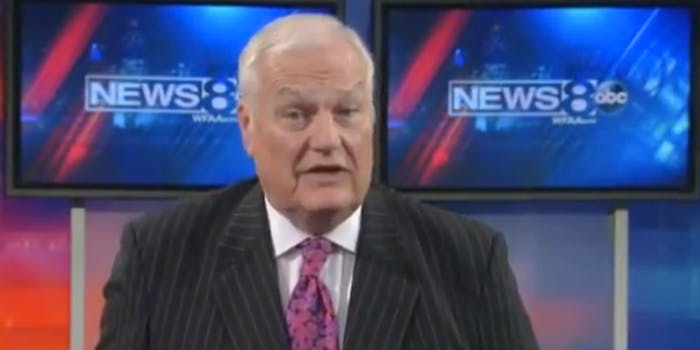 It’s sort of fitting that an old white guy who's seen decades of hypocrisy in sports is the one to put it all in perspective.

On Sunday night, University of Missouri defensive end and top NFL draft pick Michael Sam announced he’s gay in an interview with ESPN. It was a big step forward in bridging the world of football and sexual identity. And, of course, there was a lot of ugly rhetoric in response. But it surprised a lot of people that a newscaster from Texas would have the best response.

Dale Hansen, a sports anchor with Dallas station WFAA, offered an op-ed on Monday night, in a segment called “Dale Hansen Unplugged.” He gets right to the hypocrisy of anyone having a problem with Sam’s announcement, or it affecting his chances of being a draft pick:

“You beat a woman and drag her down a flight of stairs, pulling her hair out by the roots, you’re the fourth guy taken in an NFL draft. You kill people while driving drunk? That guy’s welcome. Players caught in hotel rooms with illegal drugs and prostitutes? We know they’re welcome. Players accused of rape and paid the woman to go away. You lie to police and try to cover up a murder. We’re comfortable with that. You love another man, well now you’ve gone too far.”

Hansen further personalizes it, saying he’s “not always comfortable when a man tells me he’s gay. I don’t understand his world. But I do understand he’s part of mine.” He then goes on to quote feminist poet and civil rights activist Audre Lorde: “It is not our differences that divide us; it’s our inability to recognize, accept, and celebrate those differences.”

The issue of gay rights in relation to football—and sports in general—is one we’ll be wrestling with for a while. But it’s sort of fitting that a Texas sportscaster who’s seen decades of hypocrisy in sports is the one to put it all in perspective. When’s the last time your local sportscaster quoted Audre Lorde?