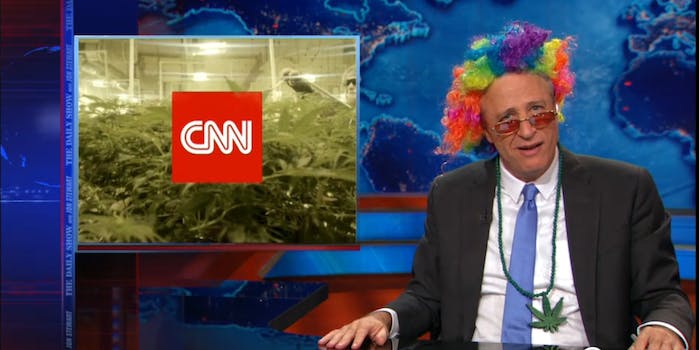 It's official. 4/20 is definitely not cool any more.

Monday night’s episode of The Daily Show proved that 4/20 is no longer even remotely cool.

April 20, the unofficial weed holiday, used to be a counterculture phenomenon, but now it’s mainstream enough to warrant a CNN report.

In preparation, Jon Stewart donned a rainbow wig and a marijuana leaf necklace for a rad stoner segment called “Uncle Jonny’s Super Kush Totally Chillaxed Sticky-Icky Informative Marijuana News Report,” but what he actually got was a boring report on taxes and healthcare. So much for all your aging stoner slang, Stewart. The world has moved on.

These days, 4/20 is all about medical-grade weed, vaping, and the tax revenue from legalized marijuana sales. Jessica Williams and Stewart’s cool millennial/dorky dad shtick has never felt so relevant.