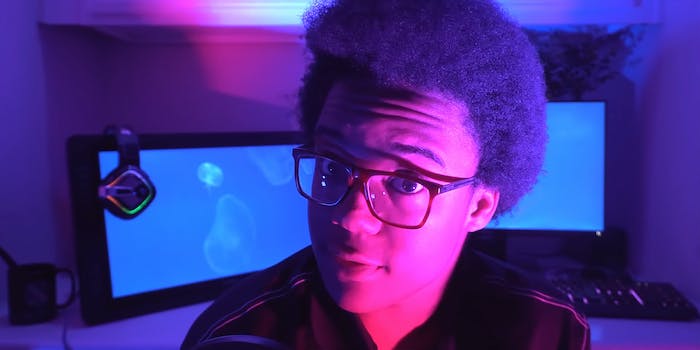 Viewers come for the art drama this hilarious 20-year-old is serving.

“Writer, artist, content creator”: These seem less like legitimate professions these days and more like abstractions used to describe anyone seeking attention on the internet. But D’Angelo Wallace is not just anyone. His YouTube channel, which he uses to skewer internet art culture and YouTube itself, has racked up over 100k subscribers in under a year—and for good reason.

With his razor-sharp wit, the 20-year-old San Antonio native makes videos that are dry, cutting, and downright hilarious without going for the easy laugh—a rarity on the platform. If you’re a jaded artist like myself, you can’t help but love the insight he brings to the nonsense involved in this career field.

His channel is a mix of commentary, (not) tutorials, reviews, and outright tragedy doused in silly sarcasm with a dash of self-loathing, all in a neat little package. “Why would I ever make more than 10 minutes of content?” he tells his viewers. “I operate in the space between ‘bare minimum’ and ‘not good enough’ and that space ends exactly at the 10-minute mark.”

One of Wallace’s latest videos, “Following a Bob Ross tutorial with the default round brush,” is the perfect example of what makes his channel great, offering his meta-humor sensibility while calling back to two of his earlier videos about questionable art how-to’s. Then there is his beloved subject, Ross, the prototype of the unfollowable YouTube digital painting tutorial. If you’ve ever tried to paint alongside him, you know just how painful it can be.

It’s his deadpan delivery that gives the videos just the right feel, matching his vaporwave-lite aesthetic with an almost ASMR-like quality. They’d be relaxing if I wasn’t laughing while I watched.

“That really slow, tired cadence that I had in [one of] my first videos on my channel with a voiceover, I recorded in my closet because I needed good acoustics,” he tells the Daily Dot. “I only had 36 subscribers. I didn’t want to make the video. I just wanted to, like, draw and put it online.”

Since he uploaded the video a year ago, it has garnered over 400K views.

“I never could have foreseen it,” he says, “so I was left in a really weird spot where it’s like, ‘OK, so if this is what I’m known for, thankfully, I don’t ever have to act more energetic than I am.’”

That monotone cadence is also a layer of protection. He believes YouTubers often feel the pressure to “keep up this positive, you know, energetic facade,” which is impossible. “I’ve had all kinds of videos on my channel,” he says. “If I recorded them on bad days, nobody would know. It’s how I am. I’m not overly energetic. I’m not happy all the time. I don’t think any of us are, and if I’m talking about something I dont wanna talk about, which often times comes up, I’m not gonna try to make it sound like I care. So that’s where a lot of my delivery comes from—I feel like it’s just me wanting to keep it genuine.”

However, for Wallace, making videos isn’t as simple as just getting in front of the camera and talking and drawing. “Some people don’t actually realize that my content is written,” he says, “which I think is because I’m delivering it so low-key. They’ll watch the whole video and just think I just turned the camera on.”

Wallace has a bachelor’s degree in mass communication from Our Lady of the Lake University. “I thought that meant I would get to shoot movies all day, but instead it meant I had to write scripts all day,” he says. He said he took classes on writing for television and movies, and that’s where he learned the value of working out ideas. “We had plenty of writing workshops where we would sit around and pick apart each other’s scripts for hours. It’s more productive than it sounds, and now I write the scripts for my YouTube videos in much the same way that I learned in college.”

Now with his YouTube scripts, he’ll have an idea, sketch it out—jokes, delivery, and all—then come back to it the next day and cut, cut, cut. “I cut so much stuff from my scripts, you have no idea,” he says.

His first couple of videos built him a following of admirers who were there for the art nerd jokes, and for the most part, he says, his subscribers “keep it civil” in the comments section. But because the internet and the art community—and, hell, even Wallace himself—loves drama, several of his videos have caused some controversy.

One is a great takedown of elitist attitudes regarding digital art, as espoused in a tweet by Jake Parker, the founder of the popular October drawing challenge Inktober. “The FULL experience of Inktober” highlights the weird gatekeeping surrounding what is “real” art and what is not, and what the “full experience” of Inktober really means. (Notably, Parker partnered with Adobe for Inktober a year later, so I guess we have a final ruling on whether digital art is real art or not.)

Another controversial video involves popular YouTuber Holly Brown (roughly 250k subscribers) who was accused of tracing a character in one of her works. She posted an explanation video that caused more problems than it solved. In it, she claims that she used the character as a reference, but then says she “straight up… traced it.” She goes on to justify it by saying she does it to “help with composition” and that she “forgot that [she] hadn’t redrawn the final image.” This didn’t sit well with many who saw it, and D’Angelo’s video reply to it exploded. In it, he picks apart the quasi-apology at every eye-rolling juncture, but he also ends it on a high note.

“What we should not do is trace artwork and upload it to Twitter without credit,” Wallace says at the video’s conclusion. “But.. I think we should also not cancel Holly Brown. It doesn’t negate all of the good that Holly has actually done on her channel, and all of the good videos that she’s made. I’ve made mistakes, you’ve made mistakes, it could be argued that YouTube itself is a mistake—and we can criticize those mistakes and laugh at them, but we can also do that without trying to end somebody else’s career. I don’t have time to cancel anybody, there are too many Tik-Tok compilations to watch.”

He says with that video, he stopped being so “universally popular,” as it garnered 2,000 dislikes. “All of a sudden, I was no longer the YouTuber you could just like. I was like the art drama YouTuber, and it was like, ‘Well, if you’re gonna give me that badge, I’ll wear it proudly.’”

As a YouTuber critiquing the art industry, Wallace says it’s part of his job to find content that sparks discussion, with videos like “Color dodge the issue—rossdraws tracing without credit,” in which called out the account of Ross Tran, who has over 800k subscribers. It resulted in an Instagram apology from Tran the next day, and hopefully a wider awareness of art ethics among his substantial fanbase. Wallace also has exactly 10 minutes of content for James Charles, a popular makeup artist with over 15 million subscribers, who has been accused of stealing design ideas.

“Art drama is huge and people like to pretend that they don’t like it, and they don’t want it in the community,” Wallace says, “but they’re still watching every video that comes out, which I think is hilarious.”

Wallace also isn’t afraid to listen to commenters. He realizes that it seems as if he’s saying that professional artists never trace, and he got a lot of flak from commenters saying, “Well, this is how professionals do it.”

“My opinion on the matter is just be transparent,” he says. “If you’re using someone else’s resources for your own benefit and often profit, it doesn’t hurt you to disclose it. You know, I’m not gonna think any less of it. I use all kinds of references in my own artwork.”

For now, Wallace’s creative focus is on the work he makes for YouTube. “I really like what I’ve been able to build so far, but I feel like, at this point, I’ve just laid the foundations,” he says about his YouTube channel. “I have my fanbase, they’re here for me, which I think is amazing. I would love to do this full-time. It’s not what I’m doing at the moment, but I’ll do what it takes to get there.”

As a guy who’s notorious of calling out art drama, Wallace is also self-aware enough to understand that turnabout is fair play. “It’s only a matter of time before someone makes [a video] about me.”