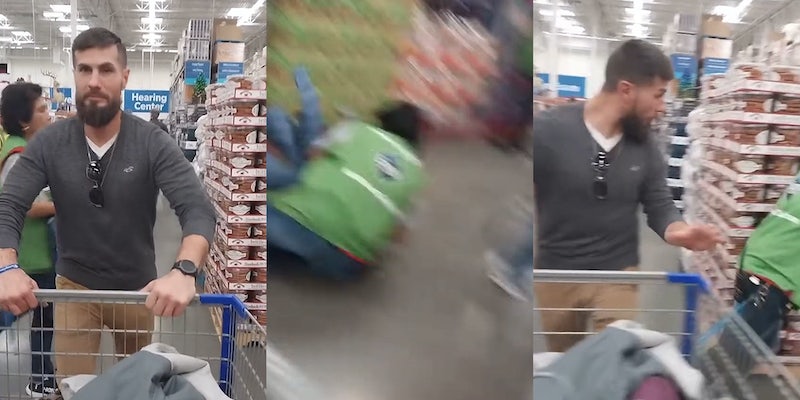 ‘If that was my mom I would be super hurt by this video’: Customer accidentally trips worker in Sam’s Club while filming video, sparking debate

‘NOT YOU GETTING THEM WORKERS COMP.’

A TikToker by the name of Karrie Kuma (@karrotjoos) went viral after uploading a five-second clip of a man tripping a Sam’s Club employee while attempting to moonwalk.

In the video, the man quickly looks behind him before turning back to face the camera. After a woman off-screen tells him it’s safe to go, the man begins to moonwalk while holding onto a shopping cart. Almost immediately, an employee walks behind him and trips over his foot, which brings her crashing to the ground.

In the comments section, viewers voiced a number of issues they had with the clip, like the fact it was uploaded in the first place. Many didn’t think it was nice of Kuma to upload the clip online, as the employee could be embarrassed by the incident.

“That would be my last day on earth,” one user commented.

“If that was my mom I would be super hurt by this video,” a second wrote.

Others noted that the man still decided to moonwalk even after looking around to make sure it was safe, drawing speculation that he either tripped the worker on purpose or wasn’t being careful enough.

“You literally looked around to see if anyone was coming and still did it,” one commenter wrote.

“How you gonna look around and not see her coming tho,” a second asked.

“Why did she say ‘go’ when she knew someone was about to be right behind him,” another questioned.

Some even quipped that the Sam’s Club worker intentionally walked into the man as a means of collecting workers’ compensation if she was injured on the job.

“HELPP NOT YOU GETTING THEM WORKERS COMP,” one viewer commented.

“People sayin poor lady like she didn’t walk in to it get that workers comp,” another wrote.

There were also commenters who said that it was the worker’s fault for “squeezing” by without saying excuse me.

“I swear if only people said excuse me instead of trying to squeeze by the world be so much better,” one wrote.

“She was walking forward and didnt see this man and cart?” a second asked.

Others thought that the worker was seriously injured from the fall, saying that “She definitely shattered her hip.”

The Daily Dot reached out to Karrie Kuma via TikTok comment and to Sam’s Club via email for further information.