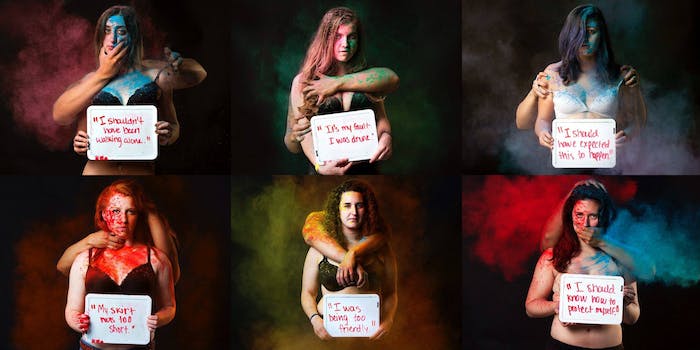 Its execution could appear over-sexualized and whitewashed.

A group of Cal Poly students recently hoped to open up dialogue about campus rape culture by launching a photo series by called “Dear Brock Turner.”

The Current Solutions series, by student photographer Yana Mazurkevich, features sexual assault victims holding up white boards with quotes from Turner’s victim, who was raped while unconscious on Stanford’s campus. The women in the photos stand against a black background as a white man’s arms grab them from behind. The women are dressed only in bras and pants and are covered in lurid red, yellow, blue, and orange paint.

And all the women featured appear to be white.

Neither Mazurkevich nor Current Solutions immediately returned the Daily Dot’s requests for comment.

An article for the Cal Poly student newspaper, Mustang News, describes the origins of the venture:

Styled after the acclaimed blog “Humans of New York,” Timmons and Fong set out to capture similar narratives through their own project, “Current Solutions”—an online platform designed to facilitate conversations about sexual assault, abuse and gender inequality.

While its intentions might have been good, Current Solutions’s hyper-sexualized, whitewashing execution is questionable.

According to the Rape Abuse and Incest National Network (RAINN), women of color are more than twice as likely to be victims of rape or sexual assault. Yet 80 percent of reported cases are by white women.