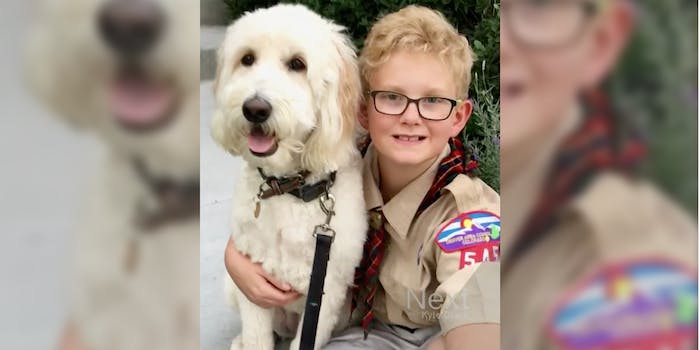 A Colorado Cub Scout has been abandoned by his den after asking a state senator about her gun control legislation.

According to Colorado’s 9News, 11-year-old Ames Mayfield was asked to leave his Cub Scout Den in Broomfield after the group was visited by Colorado Sen. Vicki Marble (R-Fort Collins). Mayfield, who had prepared for the meeting with a list of typed questions, opened the floor by asking Marble a specific question about gun control, as well as controversial comments she had made about race in 2013.

“Why on earth would you want somebody who beats their wife to have access to a gun?” Mayfield asked. “There’s something wrong in our country where Republicans believe it’s a right to own a gun, but a privilege to have healthcare.”

In the days following, Mayfield’s mom Lori met with the pack leader, the overseer of the area’s dens, who told her her son needed to find another den—his leader felt his question was disrespectful and too political.

Lori, who attended the meeting and helped her son print his list, said she didn’t help him formulate the questions and her son has just taken an interest in politics. She said the other Cub Scouts had asked Marble about fracking and the U.S.-Mexico border wall, and felt their questions weren’t dissimilar from her son’s. And while other dens have offered to take Mayfield in, Lori doesn’t feel her son should have to change dens in the first place.

In a statement to the Washington Post, the Denver Area Council of the Boy Scouts said its working with the Mayfields in order to allow him to continue his time in Scouting—he is, after all, less than four months away from becoming a Boy Scout.

“I am really heartbroken that my den leader, which I really felt like I had a pretty good relationship with, decided to kick me out,” Ames told 9News. “I was a big fan of the den originally, but now since I know consequences and stuff and how they view things, I’m kind of concerned, so no, I don’t really want to get back in.”